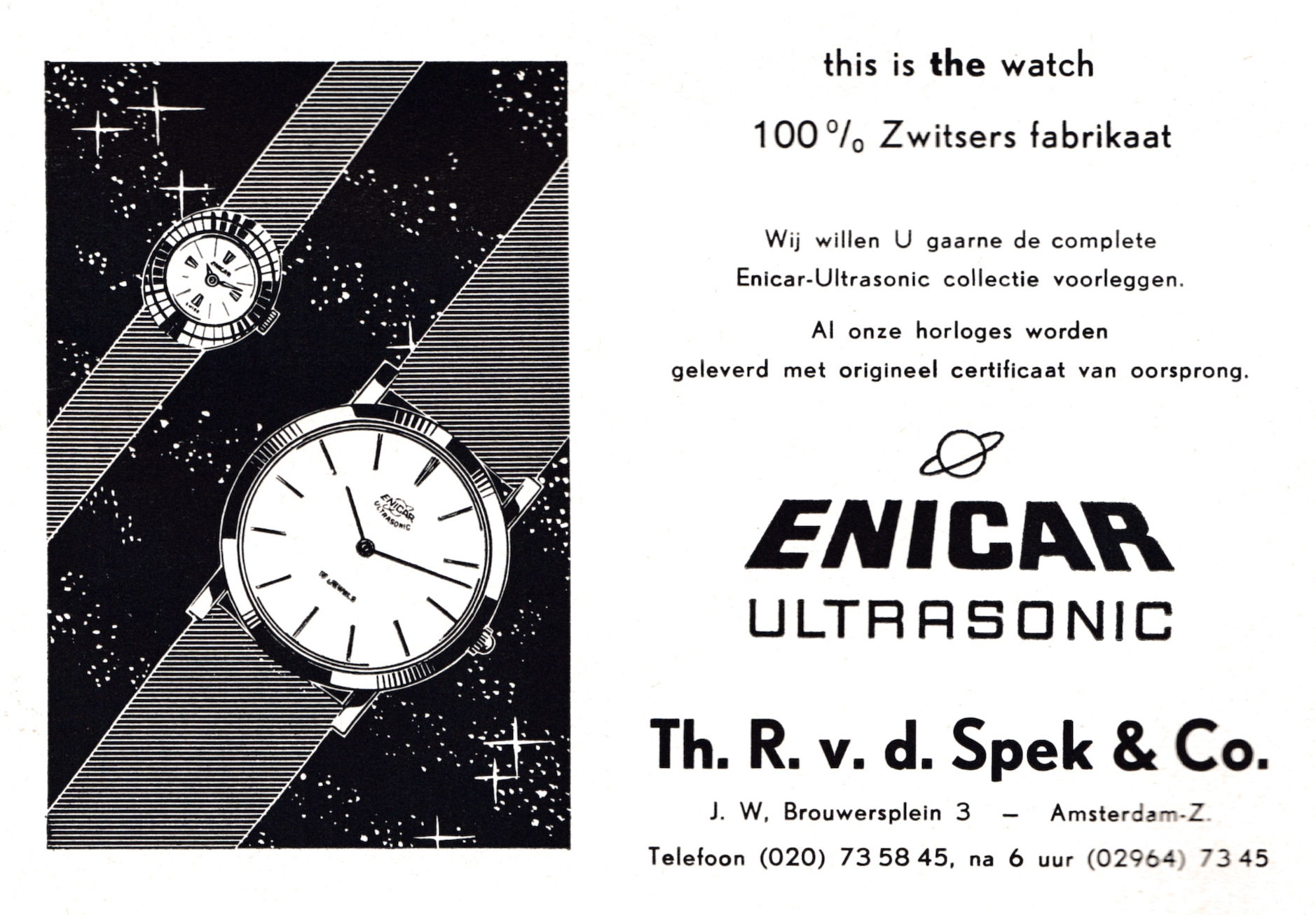 In Holland, we host the largest vintage watch and clocks fair of Europe. It’s called ‘Rikketik’ (the sound of a ticking time piece) and it’s held four times a year. It’s a great occasion to catch up with other collectors and to stroll around between the 400 exhibitors from all over the continent. I would’t call it watch collector walhalla, because of the sometimes ridiculous high prices these sellers ask for their stuff. You don’t find many Enicars on the tables, and if you do, they are often problematic. Wrong hands, beaten cases and fantasy creations are no exceptions.

But every once in a while, you’re lucky. It happened to me two years ago when I found a gorgeous electrical Enicar clock for Swedish resellers, with no less than four dials. Current time in Stockholm, Moscow, Tokyo, New York and several other world cities, all in one glance. A collector’s wet dream.

During my most recent visit, while going for the exit, I stumbled upon a large collection of antique ‘Chronos’ magazines. Not the glossy one that is still for sale at your local magazine stand, but an obscure title that was launched in 1950. It was the official magazine of the ‘FeVerU’, the Federation of Dutch professional watch and clock resellers. It was published every two weeks and had a small staff of journalists. When I opened the first one, I knew it was an Enicar goldmine, because I looked at an advertisement that I never saw before. I managed to grab the complete pile the seller was offering, about 150 magazines in total, all from the period 1954 – 1962. Got them for a steal, because the guy was tired of carrying them to the fair every three months.

These magazines contain a load of information about how the professional watch and clock sector in The Netherlands must have been like (and probably in other countries too). Already in the fifties, resellers were warned for forgeries, defaulters and upcoming Russian and Asian ‘inferior’ brands. I find the sponsored content to be the most interesting. National dealers of brands like Junghans, Lemania, Aristo, Breitling, Kienzle, Veglia, Stowa, Technos and Delano advertised their collections to the local resellers. In the case of Enicar, it was Th. R. Van der Spek & Co. from Amsterdam that was responsible for pushing the brand to the shop windows of hundreds of Dutch watch stores.

Van der Spek was certainly no tiny player, judging by the number of publications in Chronos. They were a very steady advertiser and claimed a lot of editorial content too. Together with Lemania and Junghans, they seem to be the biggest contributors of the magazine. That’s saying a lot about the position of the brands in the Dutch market in that period.

I made a selection of 50 Enicar adverts and Enicar related articles. A couple of these I will include in the upcoming book. Here’s a preview of the rest of the material. Some of the adverts you might have seen before, in German, French, English or Italian. For the non-Dutch speakers: the content of the copy is comparable.

The first chapters are ready!