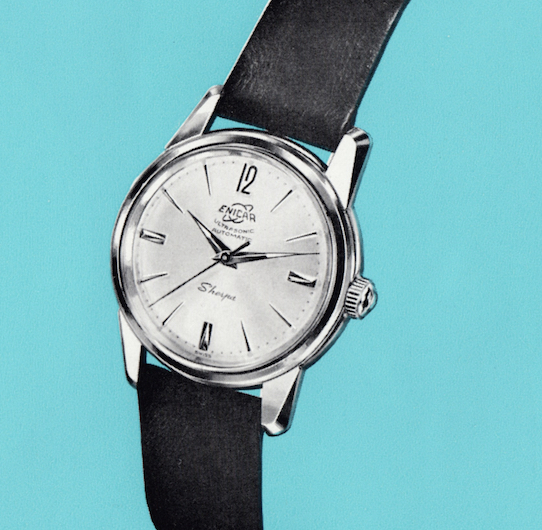 Most Enicar collectors, and probably many vintage watch enthousiasts by now, know about the 1956 Swiss expedition to the Mount Everest and Lhotse. It was a true endurance test for the various Seapearl Enicar watches that accompanied the mountaineers and their Sherpa guides. Their watches stayed accurate as the temperature changed from minus 45 to plus 45 degrees Celsius, withstanding the most extreme air pressure changes then known to mankind. To pay respect to the Sherpa people that supported Ernst Reiss and his team, Enicar decided to rename the triumphant model line. The Enicar Sherpas (later without the last ‘s’) was born.

A year later, Enicar would pull off another mediagenic event. This time, Enicar would conquer the Atlantic Ocean. To prove that the Ultrasonic Sherpas could withstand even the most difficult water resistance challenge, Enicar proposed attaching the watch to the keel of a 17th century Mayflower ship replica: the Mayflower II. Would the Sherpas still function properly after 51 days and nights in the Atlantic Ocean? Of course.

For as long as I have been collecting Enicar watches, I’ve been trying to find information about a third publicity stunt: the Enicar Sherpa Ski Test. Rumor has it a Sherpa watch was attached to a ski and, eh, tested. My imagination ran wild, imagining a professional skier, making loopings, jumping over cliffs, doing James Bond-like descends, etcetera. I never found any proof. Until recently, when I purchased a pile of antique German watch journals.

Here’s the story. To demonstrate that an Enicar Sherpa watch would stay free of condensation and keep its accuracy under extreme circumstances, the company took a regular Sherpa model out for a ski vacation in Austria. They chose to heavily test the Sherpa 100/220 BaANS in the village of Gmunden, where a notary first observed the watch for 24 hours straight. When the local radio station broadcasted its five o’ clock news bulletin, the Enicar showed a time of 16’59″48. One day later, at the start of another bulletin, the watch’s hands were at the exact same position. Not a single second was lost or gained.

After making sure the watch ran precise, it was firmly attached on the upside of a ski and officially sealed by the notary. Now the watch was ready to begin its 120 hour journey at 2400 meters. The first of 20 heats began on January 26, 1963. Each trip would be documented in terms of time and temperature. Cold, wind, storm, sun and ice water would all come down on the watch (and the poor skier). The temperature would vary between minus 15 degrees Celsius and plus 23 degrees.

At the end of the endurance test, of which the course of all heats were officially documented, the notary established no condensation, no visible damage to the crystal, no hampering of the crown, no oxidation of the dial and no discoloration of the lume. And finally, when comparing the time with the five o’ clock radio broadcast, the Sherpa lost only two seconds in 120 hours.

Would a watch test like this still have any value in 2022? Has any other brand even tried? Leave your comments below if you can shine a light on these questions.

Enicar and the Porsche Carrera 6