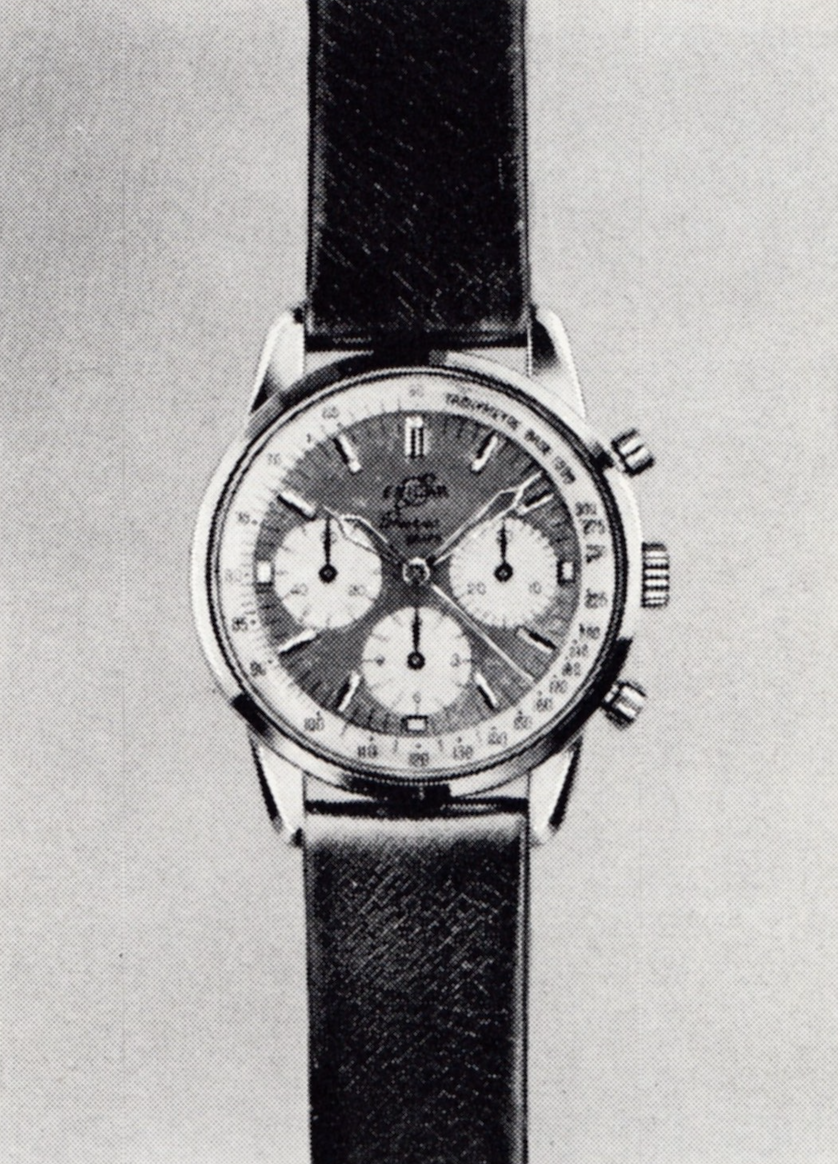 My recent trip to Biel and Lengnau left me with countless impressions and a pile of great documents. Arguably the best catch was the bag full of Saturns, the corporate magazine for the employees of Enicar. It was handed to me by Ariste Racine, grandson of Enicar founder Ariste Racine Sr. and son of Ariste Jr. I have 40 of these magazines on my desk, ready to be scanned and saved for eternity. In this blogpost I like to share an article from 1960 as seen in Saturn #23.

Enicar started their Sherpa line right after the 1956 Mount Everest and Lhotse expedition. In 1960, several Sherpas had already been introduced on the market, mostly 34 mm and 36 mm white dial models. To be honest, they were very identical to the Seapearl watches. But this would soon change.

During the 44th edition of the Basel watch fair, Enicar showed their completely new Sherpa line. It featured the Sherpa Dive, Sherpa Guide and Sherpa Graph, in hindsight three of the most iconic watches Enicar ever produced. Reactions from the visitors of the Basel fair were written down in an article that was printed in the Saturn Hauszeitung. I’ve shared this article with Nico, aka @_JimJupiter, the Enicar collector from Germany who runs the website www.enicar101.com. We discovered some very interesting stuff.

The writer of the article, head of the Advertising Department Jean-Jacques Jung, claims that the new Sherpa models were created to meet the demands of “the most highly specialized engineers of the twentieth century”. I love it when a company targets its audience! This is advertising copywriting of the early sixties, mind you. The kind op copy that Don Draper likes to quote after having consumed half a bottle of his ‘special medicine’.

Anyway, the writer describes the Guide as a completion of the earlier Sherpa World Time. It was designed for pilots, seafarers and international businessmen. But what really triggers me, is that the watch is called ‘Nicht-Serien-Modell’. What does that mean? Was it meant to be a tailor made watch? A limited edition? It’s a puzzling statement.

Next up is the Sherpa Dive. This is where it gets very interesting. The picture shows a dive watch with TWO crowns. When I studied the article, I learned that the crown at 3 is actually a button. It can be pressed to block the outer bezel. Very clever, because the bezel was vital for divers as it was meant to show how much time was spend under water. In the article the writer states that Enicar not only wanted to provide a diver with an automatic watch, but with a genuine ‘Arbeitswerkzeug’. A tool watch, in proper English.

The dial of this Sherpa Dive is one I have never seen before. It shows a pattern of circles. There seem to be other figures (dots?) between the lines, but the photo has not enough detail to see what’s really going on. All in all, this watch appears to be a prototype that I would love to get my hands on.

The Sherpa Graph is probably the most attractive watch of the bunch. This article proves that this chronograph was first presented in 1960. Interestingly, the author describes the watch as a useful tool to determine speed (in the air, on the ground and in the water), but also to measure the performance of machines. In conclusion, the Sherpa Graph is the ideal companion for racing drivers, technicians and engineers. Another noticeable thing: the sword hour and minute hands show no lume!

The Sherpa Steward and Stewardess are promoted as being watches especially for airline staff, but they lack a GMT hand. Such a complication is present in the Guide. The writer claims that these models were already tested by one or more airlines. Apparently they thanked Enicar for making their daily shifts easier. Remember, the text was written by the head of advertising, who ends the article with lots of praise for the designers of Enicar, one of the biggest watch brands in the world.

The staying power of the Sherpa Electric