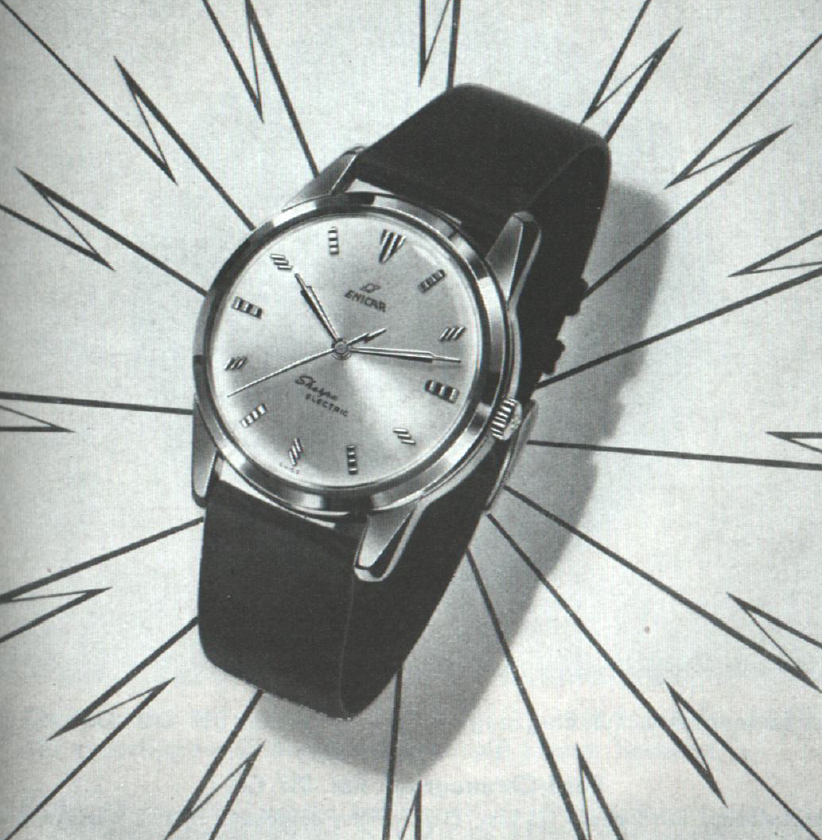 Enicar was a manufacturer of alarm clocks and watches and proud of it. Their in house engineered and build AR movements, like the AR 112X, AR 114x and AR 116x series, were made in Lengnau and can be found in many, many watches of the brand. Before they fabricated their own, most movements were provided by companies like Adolph Schild, Felsa and Lemania. The chronographs were equipped with Venus and Valjoux engines, a Seiko work can be found inside the Mantagraph and a Lemania Cal. 1341 movement is fitted into the Grapho-Matic. There may have been some minor adjustments made by Enicar to these movements, but I’m not a watchmaker, so I can’t tell you the exact details. I talked to a watchmaker in Biel who claims that the first series of AR movements were more or less based on the calibers of Adolph Schild. I can’t comment on this, but I guess all modern watch movements have their source of inspiration.

When Enicar decided to bring an electro-mechanical watch on the market, they used the Landeron 4750 caliber. This innovative piece of equipment was developed by the Landeron Branch of Ebauches SA (ESA) in 1961 and used by a number of watch brands. Off course Enicar launched their electric watch under the Sherpa flag. They called it the Sherpa Electric and it proved to be a timeless piece.

An article taken from the corporate magazine ‘Saturn’ shows that a new department was installed in the factory to assemble these watches. They called it ‘Die elektr. Uhrenabteilung’. According to this article, the Landeron movement was the only electro-mechanical caliber that was mass produced and mass assembled inside Switzerland. Author of the article Theo Gasser stresses the importance of assembling the watch in a very delicate way. “Beim monteren des elektrischen Teiles, besonderes beim Zentrieren der schmalen Kontaktlamellen, muß sehr sorgfältig und mit großter Geschiktlichkeit gearbeitet werden, da hier ein Hundertselmillimeter mehr oder weniger Zwischenraum auf der einer oder andere Seite für den Gang und besonderes den Stromverbrauch von großer Bedeutung ist.” Fitting the electronic part a fraction of a millimeter out of position, would lead to irregular timekeeping and draining of the battery.

Luckily, the guys at Enicar checked every electro-mechanical movement by plugging it to an oscilloscope and a galvanometer and double-checked it by letting it run for a couple of days in a special test cabinet. After that, it could be installed into the watch case. Again a warning is given by Theo Gasser: beware of metal splinters, hairs or dirt when putting the watch together: there is always the risk of short circuit! After completing the watch, it went back for a double-double-check of another 3 to 5 days on a sort of wheel that simulated arm movements. The articles ends by stating that the Sherpa electric is probably just as accurate as an automatic watch!

If assembled 100% correctly, the watch could run for one and a half years on a battery. Because of the vulnerability of the electro-mechanical movement, there is a separate compartment for the battery. It can simply be openend with the side of a coin, without accidentally damaging the movement. The original 1.35 Volt batteries are no longer available, but fortunately a modern 389 battery with a small spring will do the job.

For the rest, the 36 mm watch case has all the characteristics of the well known waterproof Sherpa EPSA case, including the bayonet system that every owner of a Sherpa watch drives mad. It’s hard to find a Sherpa Electric without scares and scratches on the case back.

What I love about this watch is the simplicity of the dial and the amazing hands Enicar used. To start with the latter: check out that cool lightning shape on the back end of the seconds hand. It’s a thing of beauty. When worn in sunlight, this hand casts a beautiful shadow over the silky dial. The hour and minute hand are also remarkable. They kind of remind me of the cruise ship illustrations from advertisements from the twenties.

There are two variations of the dial: one with the numbers 12 and 6 present, and one with only the ribbed rectangles. I had the first version in my collection, sold it, regretted it, and now I have the ‘no numbers Electric’. It’s very sophisticated and feels like a high quality piece that definitely exceeds the current price range of €300 – €400 on the vintage market.

There is a stainless steel case and also a 20 micron gold plated version. The stainless steel is harder to find and will be the preferred watch for most collectors. However, I must say that shiny golden piece has an undeniable charm to it. It matches with most wedding rings out there, making you a hell of a handsome husband.

As you can see in the advertisement above, the Sherpa Electric was priced DM 305,- at the time of release. That’s only a few Deutsche Marks less than the Sherpa Graph MkI, aka the Jim Clark. I’m not surprised, considering the high costs Enicar must have been making by assembling and testing these watches. We’re talking state of the art technique from the early sixties. It was risky business and I imagine there was more failure in production than with the Sherpa’s containing hand winding or automatic movements.

So, these Sherpa Electrics deserve some love. They make great dress watches, without being too slick, thanks to the sturdy EPSA case. And they have enough style to separate them from the masses. Grab one if you can!

The Enicar book, an update