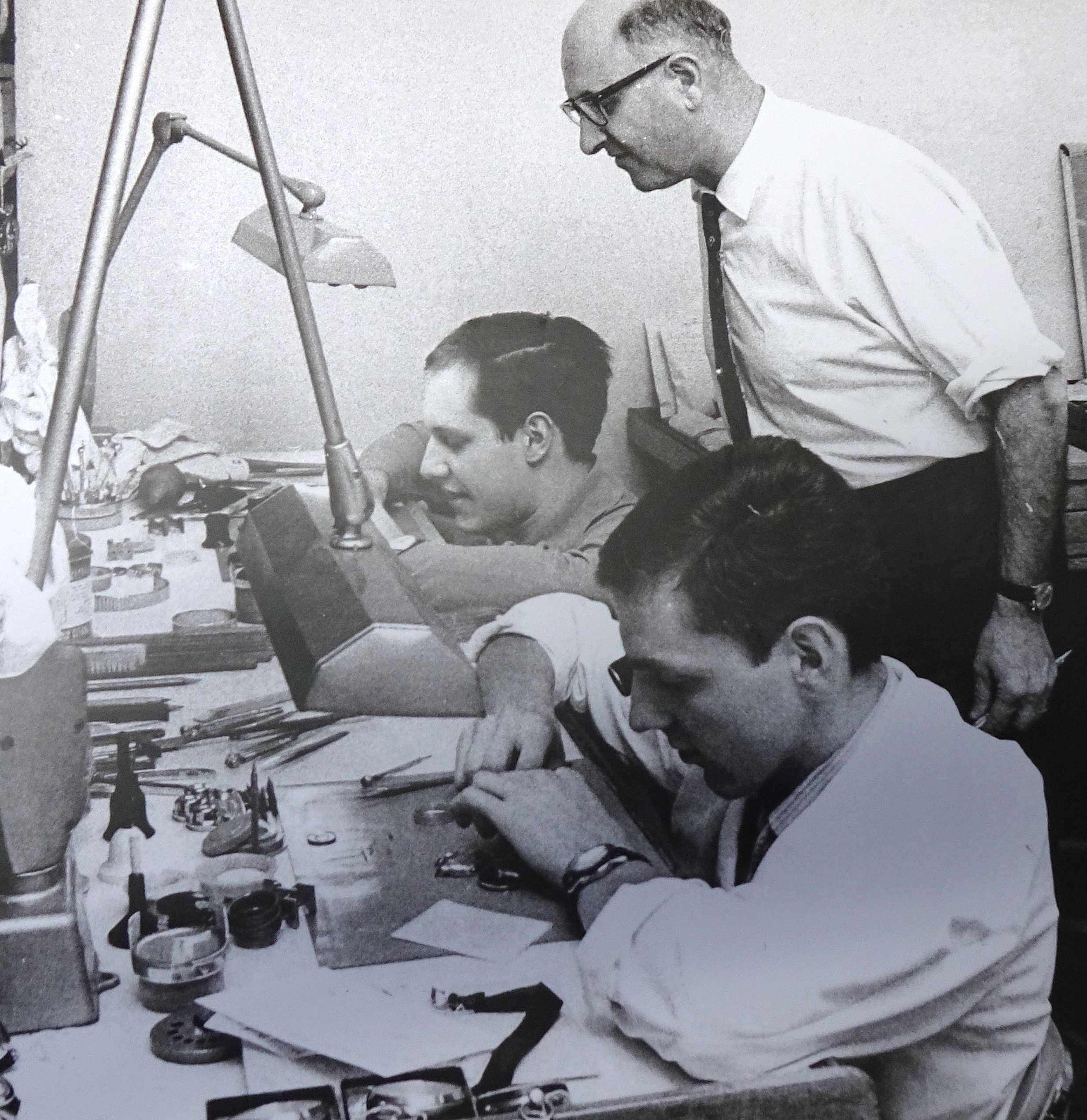 My final week in Biel and Lengnau brought me everything I hoped for and more. When I planned this trip roughly a year ago, I aimed for two or three interviews with people connected to Enicar and maybe some documents as a bonus. I got seven great interview sessions and a pile of photos, brochures and company magazines to sink my teeth in. Not bad for a visit to a country with a reputation of being a bit reserved.

On Monday I met with the Gemeindepräsident of Lengnau Max Wolf (the mayor, but without the salary). The present community of Lengnau has about 4.900 inhabitants and mister Wolf represents them in official occasions. It is a voluntary job, that’s why he was the towns butcher too until a couple of years back. His father started the business and Enicar was one of the biggest clients. Next to Enicar there were three other watch brands in Lengnau, and according to Max these companies provided a lot of financial services to the community’s sport, music and hobby clubs. “If our local soccer team needed clothing, we only had to ask. We had four ‘funders’ and they never let us down”, Max recalls. So when the quartz crisis came, things changed radically. For starters, the unemployment rate in Lengnau rose to a critical level and the national government had to support Lengnau and other watch cities. It was though for everyone. “The Racine family wasn’t spared”, says Max. Their house and properties had to be sold and Ariste Racine Jr., son of the proud founder, moved to Lyss (also in the Bern district). Fortunately, today the town of Lengau is doing great. “Our infrastructure has always been good and we have a highly educated population with great technical knowledge. One of the biggest companies here is Rado. Other employers are in the engineering and health care industry. We recovered well.”

When I asked mister Wolf if any building plans from the Enicar factory were saved, he made a quick phone call. Ten minutes later, I had a stack of ordners from 1955 and 1957 in my hands containing the original architect drawings from all angles. Even the Saturn Globe was already drawn on the roof, albeit in very thin pencil lines.

My next appointment in Lengnau was with Heinz Rollier again, the 73 year old watchmaker who learned the trade inside the Enicar factory. After leaving Enicar, he worked for Heuer, Rado and Chronoswiss, among others. Heinz’ father Charles worked for more than 30 years at Enicar. On the day of his 30th work anniversary, he was congratulated by Director Ariste Racine Jr. He received a framed and signed picture as a souvenir of this happy occasion. As always, the photo was also printed in the Saturn ‘Hauszeiting’. By the way, 30, 40 and even 50 years of loyal service was no exception. “When a technician or watchmaker turned 65, mister Racine used to ask if they would stay for maybe a few more years. Always friendly and warm. So many stayed”, says Heinz.

Heinz Rollier and an AR movement.

30 years and a handshare from Ariste Racine Jr.

In Biel, I met again with Ariste Racine, the grandson of Ariste Sr. and son of mister Racine Jr. He talked about his fathers first business trip to China, somewhere in 1952 or ’53. “Leaving from Moskou, he had to take the train to China. It was pioneering. He did the same in North and South Africa and South America. We even had a factory in Mexico at one point.” Ariste also told about his year at Landis+Gyr for which he interrupted his eleven year career at Enicar. “I went there to further develop my expertise as a technical engineer. That was not uncommon at that time and both companies benefitted from this”, says Ariste.

To my surprise, mister Racine brought 40 copies of the Saturn corporate magazine, the first dating from early 1952 and the last one from winter 1972. A quick glance immediately led to a scoop: Enicar was the official partner for timekeeping during several races of the cycling team of Eddie Merckx! Mister Racine also told me that at one occasion the company presented an Enicar Sherpa watch to another legend of professional cycling: Jacques Anquetil.

The last rest place of the founders.

The former house of the Racine family.

View from the railroad.

Two days before my leave, I got to further explore the legacy of the Racine family. The last resting place of Ariste Racine Sr., his wife Emma Blatt and daughter Paulette is in Lengnau. So is the former family residence. But the most visible reminder is off course the former factory building.

My last visits were to the Maestro of vintage watch parts Maurizio Zannol of Herrli Horlogerie in Biel and the Musée International d’Horlogerie in La Chaux-de-Fonds. One is a museum, the other one too (more or less). I urge you to visit both if you ever have the change.

That logo is hypnotic.

This is quartz, the killer of industries.

The plus minus 40 copies of Saturn that I got to take back to Holland, are a huge source of information for this weblog and my upcoming book (more information about that will be available soon). So far, I only had the time to take a very quick look at what’s inside, but I can confirm that the names of sport legends like Stirling Moss, Jim Clark, Gerhard Mitter, Ken Rosewall and Geoff Duke pop up in interviews, reports and advertisements. The origin of the Saturn symbol is explained. The design genius of many Sherpa models gets a name and a face. There are stories of business trips to new markets all over the world. We get to see new watch models. The watch manufacturing in Lengnau and Oensingen is described in detail for a time span of more than 20 years. And there is a 10 page interview from 1954 with the founder of Enicar and his wife. Than there’s also catalogs and brochures from the archives of Ernst Albrecht and Heinz Rollier. This and much more. It’s like Christmas.

Promotion for the Aquagraph.

A pile of vital info.

Over 20 years of corporate news.

Three weeks of Biel and Lengnau, in search of the hidden stories of the Enicar brand, have come to an end. I like to say thank you to all the people I’ve interviewed and chatted with. Thanks for the coffee, cigarettes, cheese, chocolate, beers and kindness. Hope to see you again next year. And also a huge thank you to all who replied to my Insta posts and weblogs. Till next time watchfam.