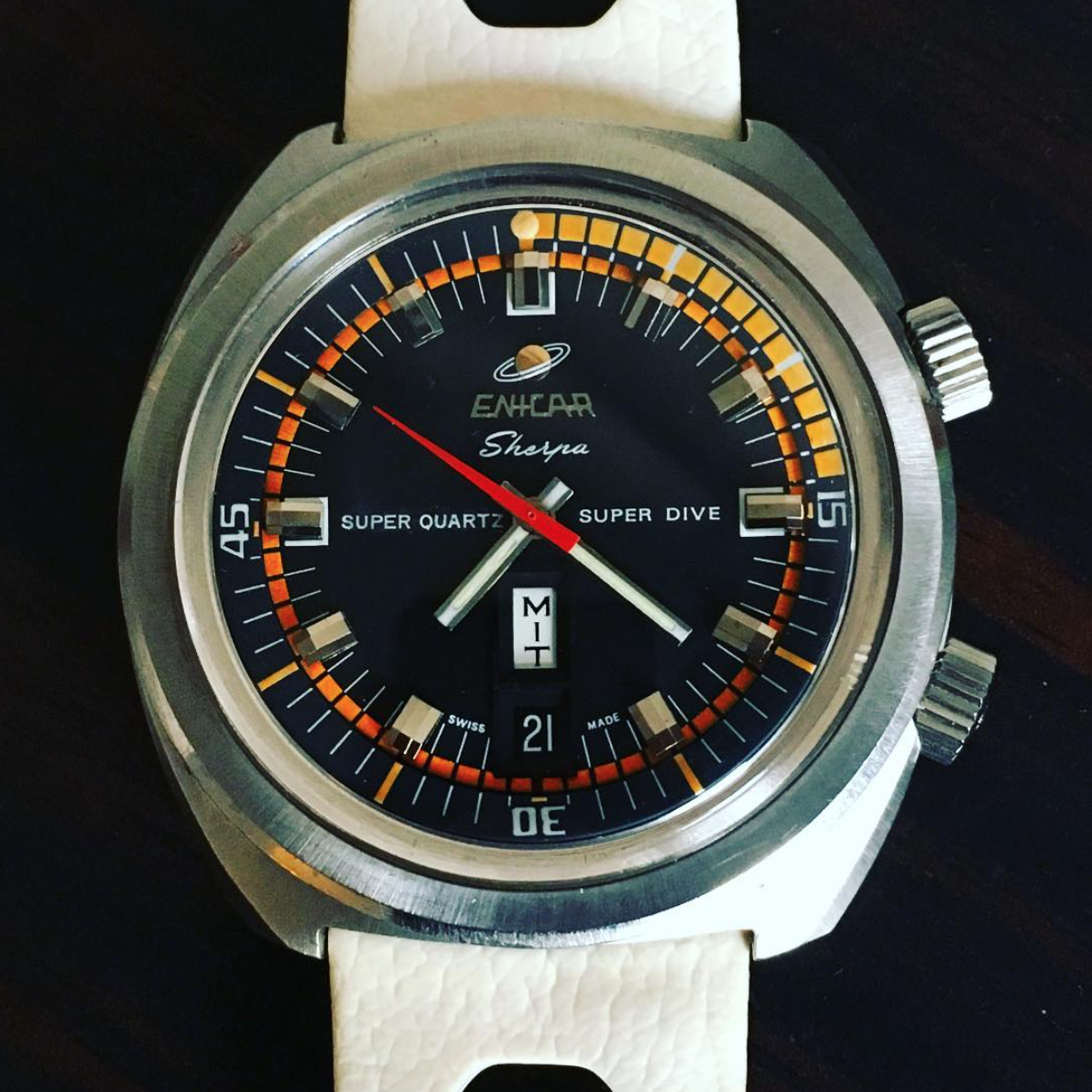 Recently, I acquired a very nice Enicar Sherpa Super Dive MkIII from the mid seventies. This HUGE dive watch was the final incarnation of the Sherpa Super Dive models. The MkI and MkII, as you might know, came with the characteristic long lugs EPSA case. That 40 mm case was also used for the Sherpa Graph, Aqua Graph, Jet Graph and Super Jet, to name a few. The heavy metal cushion case (43 mm x 48 mm) we have here, oozes a seventies vibe. The short, thick hands and orange accents make this timepiece a funky happening (nothing I can’t handle, wink wink).

What struck me when I was offered this watch, is the text line on the dial. It says SUPER QUARTZ SUPER DIVE. It may not be very a big deal, but it is intriguing nevertheless, because I never ever saw a Super Dive MkIII with another text than AUTOMATIC.

The Super Dive MkIII is equipped with Enicar’s in house produced AR1167 day-date movement. This movement is part of the AR165-series, probably the most successful power source the brand has ever build. After Enicar filed for bankruptcy in 1987, much of the inventory was bought by Gerd-Rüdiger Lang of Chronoswiss. The AR1167 automatic movement would become the fundament for the Chronoswiss Cal. 122. A great in depth article about the movement and case techniques used in the Super Dive MkIII can be found on www.timezone.com. A recommended read!

So, after reading all about the AR1167 movement inside the watch and – after opening the case – having seen it being present in mine, there is absolutely no doubt this Super Dive is not a quartz watch. But the dial still says SUPER QUARTZ, right? And all the others don’t. Having examined it very closely with my full scala of loupes, I can confirm the following:

I can only assume that this means the Sherpa Super Dive MkIII was going to be launched with a quartz movement. Now, we all know what happened during the quartz crisis (or as some called it: quartz revolution). And even though Enicar put up a great fight, this brand too lost the fierce competition from the Asian watch producers. Enicar didn’t join the SWATCH Group, formed in 1983 at the critical point of the crisis. In stead, they went on producing watches with their own AR quartz movements. The first of these was the AR320, introduced in 1975. Reviews and technical details about this movement can be found on the website www.crazywatches.pl.

I have no idea how many Super Quartz watches Enicar actually made during the decade they were still in business. My guess is not nearly as much as the mechanical watches they distributed all over the world (in more than 70 countries!). These quartz Enicars don’t pop up on eBay very often. Enicar probably set the standards way too high to successfully compete with the Asian made timepieces. They must have been building high quality watches and selling them at break even price point (or below), just to defend their market share. Any marketeer can tell you this is a lost battle. Enicar did exactly the same thing with their B-brands like Alprosa and Longeau: they build these like the regular Enicars, with a lot of quality, and sold them for much lower prices.

The SUPER QUARTZ SUPER DIVE may have been an effort to revitalize an already existing Sherpa model and adding a quartz movement, to jump on the hype. Maybe Enicar got started by reprinting the dials, adjusting the AR320 or sourcing another fitting movement and doing some market research. And than everything collapsed.

I think – and this is very hypothetical – my Super Dive got a replacement dial at the watchmaker’s, during a service or because it came in parts. The only dial at hand was this SUPER QUARTZ SUPER DIVE: a dial that was made to lead a quartz watch life. Or the other way around: this watch was supposed to be equipped with a quartz movement, but time was running out and it ended up with an AR1167, which was in stock till the end of Enicar’s life cycle. Or maybe it is just all one big mistake, made by someone at the dial factory who was not paying attention. Who knows. And that is the fun of collecting Enicar watches: you just never know for sure 🙂

EDIT Februari 13: IG member and Enicar addict @enabrantain66 gave me the following information: “One of the guys on Uhrforum.de has spoken with ex-workers from Enicar. They said in the end Enicar put everything together what they had in stock. That might explain the Super Quartz dial with an automatic movement.”

The book was sent to 34 countries so far

Born in 1975, my first watch was a Ruhla, my first audio cassette ‘The best of Elvis Presley’ and the first movie I saw in the theater ‘Terminator 2, judgement day’. I am a professional copywriter with 20 years of advertising experience, a father of two, a husband and a Motörheadbanger without hair. If you ever visit Eindhoven, drop by for a beer.