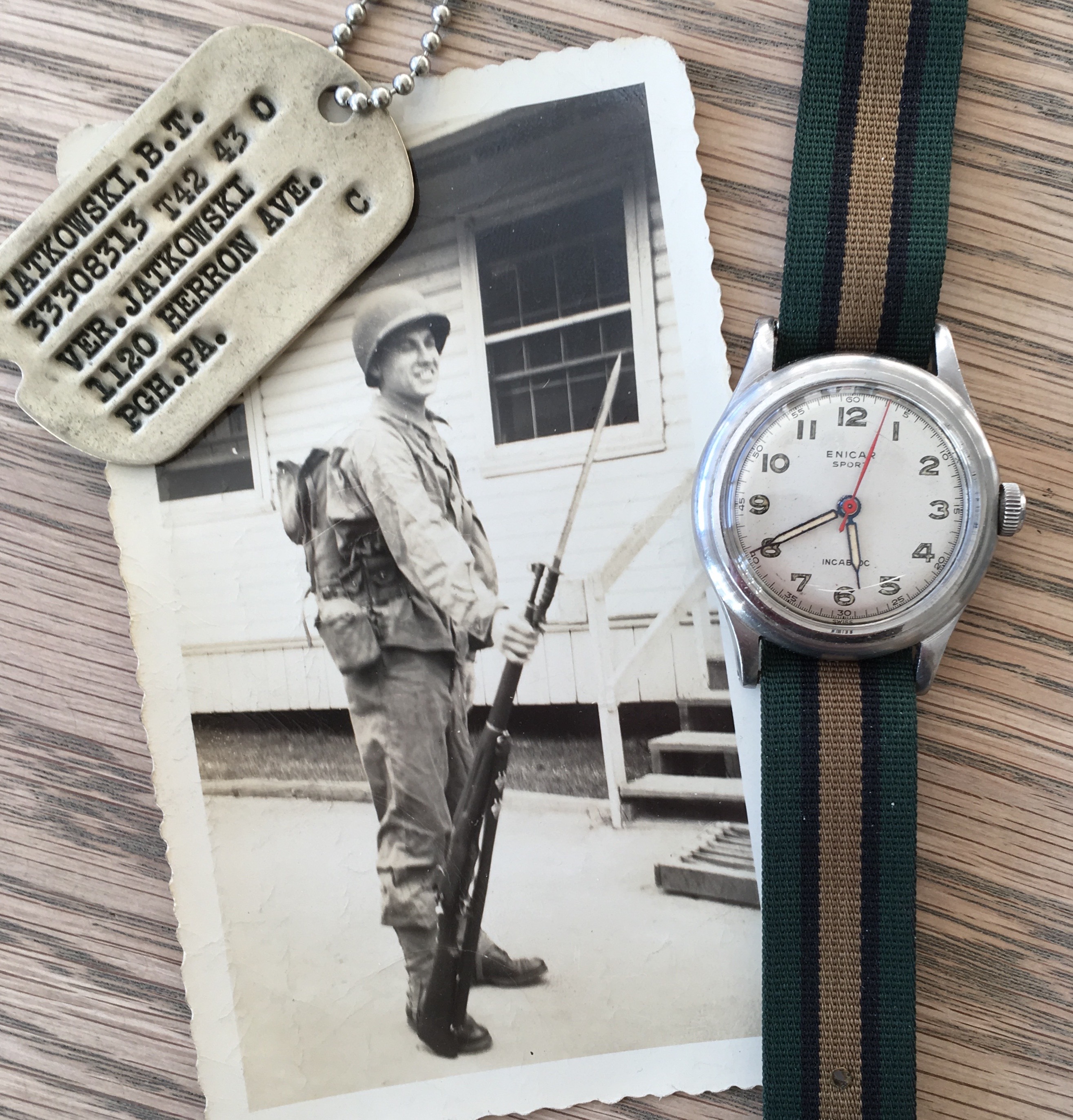 Since I started collecting Enicar watches, I’ve always favored the models from the sixties and seventies, particularly the robust Sherpa divers, colorful GMT’s and gorgeous chronographs. But this weblog is more than just an ode to the beautiful watch designs by the Saturn brand. It’s about brand stories, like the clever advertising strategy that Enicar laid out, testing their watches to the extreme (I’m talking about the 1956 Himalaya expedition and the Mayflower II voyage with 50 days of Atlantic Ocean waves). Or Enicar’s magnificent eye for sport icons like Jim Clark, Ken Rosewall and Sterling Moss and the way these champions were made ambassadors for the brand. I’m a sucker for the wonderful stories that the overlooked and underappreciated watch brand has given us.

The story I want to tell today is that of Enicar owner Bernard T. (Jason) Jatkowski from Pittsburg, Pennsylvania, USA. This young American, carrying an early 1940s Enicar timepiece and a 1903 Springfield rifle, was one of the brave men who fought against the Nazi’s and helped to free Europe. I recently got my hands on the original documentation from the US Army that was send to his family. It came with his identification tag and… his Enicar.

But before we move on to the military career of our US private, let’s take a look at the British military and the watches they used during the war. I recon most watch collectors are familiar with ‘The Dirty Dozen’. On the website www.acollectedman.com, there is a very insightful article about this topic. In short: in the 40s, during World War II, Britain’s Ministry of Defence needed watches to issue to army personnel – they felt civilian watches just didn’t quite make the mark. Perhaps in a bid to maximise production, they invited any Swiss manufacturer who could build a watch to the requested standard, to do so.

Very strict specifications were set, and all in, twelve watch manufacturers were eventually accepted, resulting in the nickname ‘The Dirty Dozen’. They were: Buren, Cyma, Eterna, Grana, Jaeger Le-Coultre, Lemania, Longines, IWC, Omega, Record, Timor and Vertex. Interestingly, records show that Britain’s Ministry of Defence sent orders to thirteen. The thirteenth was Enicar. Due to poor record keeping at the time, it is hard to determine what really happened. Rumour has it that the Allies investigated several Swiss companies and found that Enicar was supplying the enemy, and subsequently black listed them! However, there is proof that a genuine British WWII era issued Enicar watch exists over here. “Enicar did good trades with many military forces all over the world”, researcher and author Nico van Dijk states on his Enicar dedicated website.

Back to the United States, where Mister Jatkowski, an enlisted man in the 274th Ordnance Maintenance Company AA, must have received his Enicar Sport around 1942. This particular model was introduced by Enicar in 1940 for both military and civilian markets. The case measures 32.7mm without the crown and 40.2mm lug end to end. It was probably delivered with a leather strap, since NATO straps didn’t get introduced until the 70s. The movement is marked Seventeen 17 Jewels Enicar Watch Co. Swiss Unadjusted. An AR movement number is missing. The hour/minute hands have radium in the middle (aaahhhh…. DANGER!).

The Enicar Sport may not be as exciting and colorful as the Sherpas from the sixties and seventies, it is still a neat little watch. For starters, it has a metallic dial that shows some nice shades when it hits the sunlight. I love the design of the hands: they carry a decent amount of lume that has aged very beautifully. This is definitely a timepiece for patina fans. Even the seconds hand is intriguing, as it is not a straight line. It is very delicately shaped, showing extra thickness in the middle. The red color is just awesome, adding contrast to the watch.

No logo on the crown.

The back case is not signed.

What journey did this Enicar make in her early years? To find out, we only have to take a look at the documents that Uncle Sam was kind enough to provide to the family of private Jatkowski.

The 274th Ordnance Maintenance Company AA was activated on October 20, 1942 at Camp Flora, Mississippi Ordnance Plant, Mississippi. 71 Enlisted Men from New York City and vicinity commenced active service at Fort Dix, N.J. on November 9, 1942. They completed three months basic training, technical training, three bivouacs and field maneuvers as well as numerous road marches and other training activities. On January 19, 1944, the Company sailed from Staten, Island, N.Y. on USS “Exceller” and disembarked in the United Kingdom on January 31, 1944. On June 14, 1944, they commenced crossing the English Channel in one LST and two LCT’s and landed on Utah Beach, Normandy France on June 15.

The Company was assigned to the Ninth Air Force on October 26, 1944 and would go on to serve in Belgium before V-E Day May 8, 1945. May 17, 1945 the Company moved to Gablingen Airfield, near Augsburg, Germany. On August 11, 1945, they moved to the Messerschmitt Factory on the south side of Augsburg. V-J Day was on September 2, 1945. The Company received Battle Participation Credit for the Campaign of Normandy, Northern France, Rhineland and Ardennes.

Also included in the documents are two School Year 1938 and 1939 Pupil’s Progress Reports from the Pittsburgh Public Schools 308 for English and Social Studies. His mother had to sign for these. Just imagine how young Mister Jatkowski was when he went in the military…

So where does this story end? Mister Jatkowski passed away in 2002, reaching the respectable age of 81 years. He was a brother, a husband, a father, a grandfather and even a great-grandfather. Also, he worked at the Pittsburg Brewing Company for 33 years. I can not confirm he wore his Enicar till the end of his life. But I do know this: I received the watch in near perfect condition, running strong and accurate. This can only mean he took great care of it, just as he and his Company did during WWII for my part of the continent. Respect.

Obituary of Bernard T. Jatkowski. Rest in peace Mister Jatkowski and thank you for your braveness.