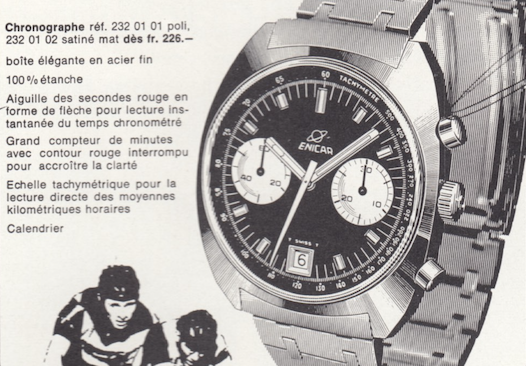 Like many other watch brands, Enicar has several models named after famous ambassadors by the vintage watch community. The 1960 and ’61 Sherpa Graph MkI ‘Jim Clark‘ is no doubt the one that most vintage chronograph collectors will be familiar with. The ‘Stirling Moss‘ Sherpa Graph, as well as the ‘Innes Ireland‘ are on the wish list of Enicar fans with a larger wallet. The equally Valjoux 72 powered three-register chronograph ‘Gerhard Mitter‘ is priced a lot friendlier. For now, that is. Because wrist watches referring to sports icons, actors or astronauts tend to become a target for vintage aficionados, with increasing prices as a result.

I was lucky enough to track down a multi-dial Sherpa World Time from 1967 which I renamed ‘Kaleidoscope‘ (after a very democratic process). During the research for the Enicar book, I found a very interesting, high quality chronograph that is another perfect candidate for a nickname. Before we get into the name game, let me first introduce you to the link between Enicar and professional cycling in the mid sixties and early seventies.

In 1967, Enicar presented the Enicar-TIGRA professional cycling team to the Swiss sport press. As an endurance sport, cycling was a great sponsorship project. Its team spirit, courage, determination and accurate timing equipment was an excellent match for Enicar’s brand values, according to managers J.P Miserez and E. Mehli. Enicar also felt a close connection with bicycle manufacturer Tigra. Aware of the fact Swiss cycling teams had not been extremely successful in previous years, both the watch and the bike brand gave a financial stimulus to help get the team back on track whilst creating good publicity at the same time (Neue Presse stepped in as media partner in 1968). In Saturn’s 1967 Summer edition, a reporter described this collaboration as “an experiment that will hopefully satisfy all participants during the Tour de Suisse”.

Enicar claimed to be the timekeeping contingent at over 40 professional and amateur sport events inside and outside Switzerland, including cycling. In 1971, Enicar was the official timekeeper for the one-day racing event, A Travers Lausanne. The first edition of this race was held in 1940 and was understandably dominated by Swiss cyclists during the war. Spanish champion Luis Ocaña won the 1971 edition while Eddy Merckx finished second. Celebrating the race, Enicar promoted a two-register chronograph (with Valjoux 232 movement, ref. 232-01-01) as the most accurate watch for all sports.

Enicar was the official time keeper of the 1971 cycling event A Travers Lausanne.

It seems only logical to name the chronograph in the advert after the iconic cycling champ Eddy Merckx, right? The truth is that Merckx was never contracted by Enicar to endorse the brand. He was spotted with Enicar advertisements behind him during the press conference before the Lausanne event, but he was nothing more than a contestant in a race where Enicar was the official timekeeper. In fact, Eddy Merckx was an ambassador for another watch brand: Rodania (thanks for your research Martin Klocke).

Merckx checks in at his sponsor Rodania.

Merckx during the press conference.

To me the nickname ‘Lausanne’ seems therefor much more appropriate. It sounds sophisticated, Swiss and timeless. But since I am not God, I am keeping the door open for suggestions. Heck, you can call this watch whatever you want. To quote the great philosopher Bob Ross: “This is your world, you’re the creator”.

Taking a closer look at the watch, there are is a lot to like. The symmetry of the dial is what I like best. Technically, the watch is identical to the Big Eye model (case size, movement, date window), but personally, I find the design of the ‘Lausanne’ dial more balanced. This is even more apparent with the white dial version of the watch: the silver subregisters pop, without shouting out for attention.

The stainless steel case diameter is 37 millimeters. A perfect size for my tiny wrist. The Sherpa Graph, Jet Graph, Aqua Graph and Super Graph are of course noticeably larger. But they are heavier to carry too. The cushion case (C-case?) for this chronograph wears extremely comfortable. And then there is the orange triangle chrono hand. A true Enicar trademark. Back in the days when these chronographs were produced, a hand with such a contrasting color must have been very welcome. Remember, this was a tool watch: a time piece that served a purpose. Nowadays, vintage watches are a way to step out of the crowd and the bold Enicar colors may be one of the main reasons why these the brand’s ‘stop watches’ have become so popular.

Big Eye: same case size and movement as the ‘Lausanne’.

As mentioned earlier, the movement is the very accurate and reliable Valjoux 232. I have owned a Big Eye with the same movement and every time you wind one of these chronos you feel the immense quality and Swiss craftsmanship.

To wrap it up, my vote goes to ‘Lausanne’. Please let me know if you agree. Also, feel free to send me a photo if you happen to own this model. My friend and fellow Enicar collector Nico (aka @_jimjupiter) has an ongoing project in classifying Enicar chronographs and determining production numbers based on case references. It would be interesting to find out how many of these watches (and what configurations in terms of hands, case finish and dials) where put on the market.

The Enicar legacy of GVM