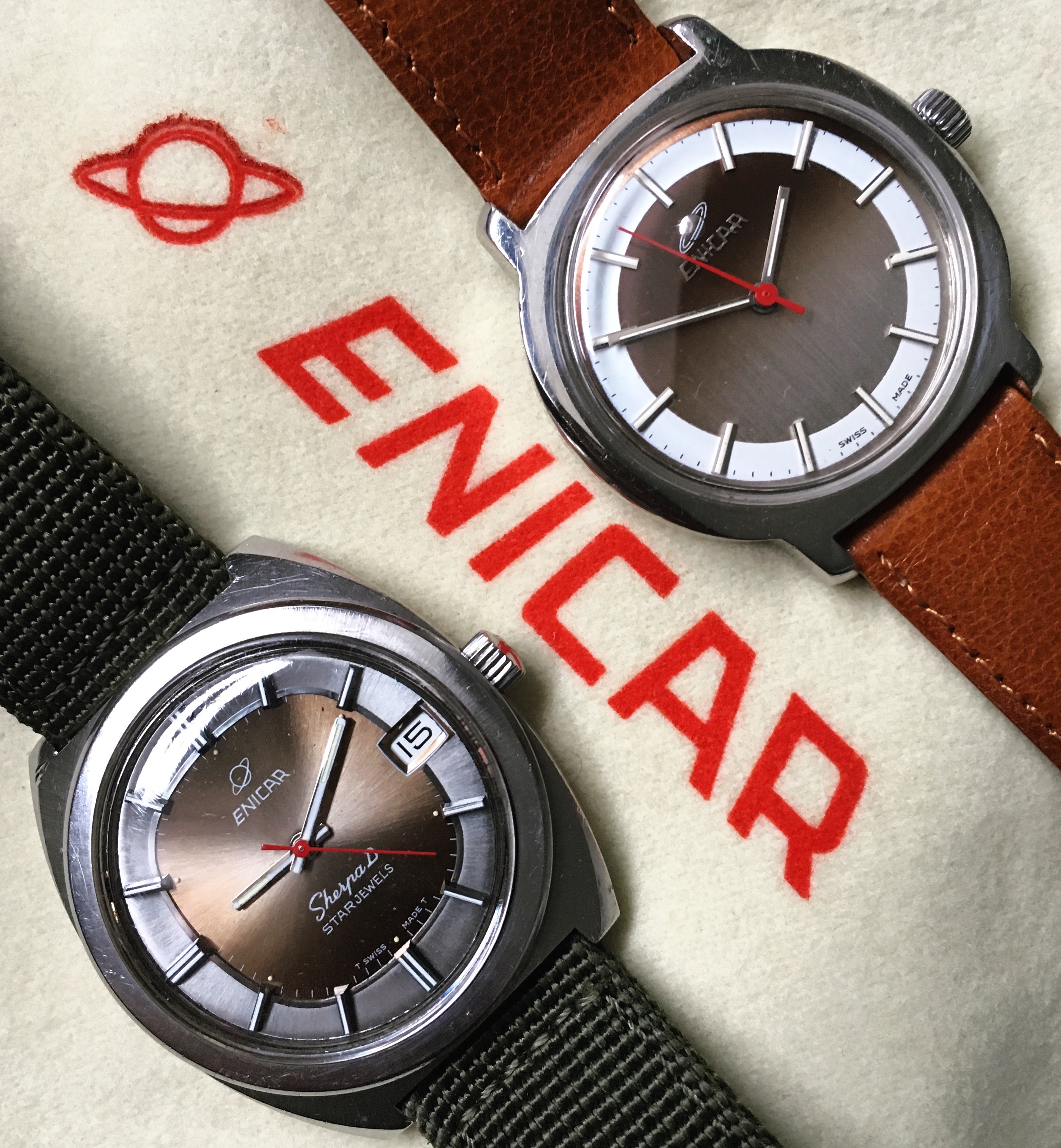 I like logos. Always did. When I was young, I collected all kinds of promotional material with the coolest logos from around the world. Stickers, pins, pens, advertisements, T-shirts, you name it. The logos of audio-visual companies, car brands and oil companies made the deepest impression on me. Why? Because they were colorful, simple and imaginative.

BASF tapes: an icon of the seventies and eighties.

Mercedes-Benz and the star logo.

There is a TV screen, a standard theaterscreen and a widescreen in this logo.

The Enicar logo is a very basic presentation of the planet Saturn and it struck me from the first moment I laid my eyes on it. It’s a modest, single line design, but it represents a planet that is 95 times bigger than earth. As a co-owner of an advertising agency, that is the kind of symbolism I dig. I also think it fits the kind of watch company Enicar was (as far as I know) very well. Enicar was not the kind of brand to use crowns and curly fonts. Of course, this is probably also a marketing strategy. Enicar produced huge numbers of relatively cheap (as in affordable) watches for the Chinese market. It would have been implausible to make these look like a zillion bucks. Decent quality and reliability were the benefits to communicate. When Enicar started the Seapearl and Sherpa lines, they did introduce a more expensive looking handwritten font type. But these Seapearls and Sherpas were primarily targeted at European en American audiences and cost a lot more than the basic Enicar watches.

Anyway, as with most logos, the Enicar logo has changed during time. In this blog I will take a closer look at the different stages the logo went through. I’m not going to explain why they made the choices they made, because I have found no references, sources or publications about this. But I will share some thoughts of myself and some of my colleagues who work as graphic designers at my agency.

In 1913 Ariste Racine and his wife Emma Blatt started a ‘Manufacture d’Horlogerie Ariste Racine’ in La Chaux-de-Fonds. As the name ‘Racine’ was already a trademark, registered since 1870 by Jules Racine Sr., Emma Racine-Blatt proposed an anagram of the family name: ‘Enicar’. Ariste Racine registered his manufacture and that brand name on January 6, 1914. Enicar was used only as his telegram address. In his publications, he used ‘Horlogerie Ariste Racine’. On April 11, 1932 the company was officially named Enicar Société Anonyme (equiv. to Ltd.). More information about the history of Enicar can be found on the website www.enicarcollectors.net.

As far as I can judge, up till the late forties, the company only used the word Enicar to make their watches recognizable for the consumer. This lettermark (or monogram logo) was used in a non-specified font type. Many watch brands did the exact same thing back then. Advertising and marketing as we know it, were of course not the big industry it is today. A decent product, good price and wide distribution was what mattered, not brand image.

Fase 2: The birth of Saturn

The Enicar Sherpa Graph from 1961

The Enicar Sherpa Electric from the early sixties.

An Enicar Seapearl from the late fifties.

For a period of approximately ten years, the company used the Saturn symbol, interrupted by the word Enicar. This is called a combination mark. The logo is either applied on the dial or plainly printed. In many occasions, the logo had ‘automatic’, ‘supertest’ or the word ‘ultrasonic’ printed underneath. I will cover this in a future blog, because there is a lot of confusion about the words ‘supertest’ and ‘ultrasonic’ being model lines or not.

From the mid sixties till the mid seventies, the brand separated the Saturn symbol and the name Enicar in their communication. A smart move, because this enabled Enicar to use the planet Saturn as a decorative element on all sorts of promotional items. It can be compared to the Nike logo: the swoosh doesn’t need the word Nike to speak for itself.

The font type used for Enicar is not a standard one. It is probably developed by a graphic designer, exclusively for Enicar. I don’t see it being used for other textual elements in advertisements or brochures. Who is responsible for the graphic design of the logo and the amazing looking font is still unknown to me. I’ve talked to several people close to the old brand, including resellers and former employees, but no one could answer my question. Mister Jan Zengerink, a former importer of Enicar in the Netherlands, went to further improve his watchmaker skills at the Enicar factory in Lengnau in 1955-1956. He told me recently that he could not remember Enicar having its own design department. According to him, designs of watch dials and promotional materials were all outsourced. I would love to know to whom!

In the period from the mid seventies till the moment Enicar went out of business, the company used a ‘golden sphere’, crossed by two thin lines (the rings of Saturn). This is my least favorite incarnation of the logo, as I think it was a bit too bling bling for the brand. But I must admit that it stands out on a darker dial and it can look pretty nice when the sun hits the right spot.

We also see a lot of watches from this period where the word Enicar is applied on the dial on a different spot as the Saturn symbol. There are even loads of examples of Enicar watches with only the brand name present. A modern watch brand would have at least a corporate design guide to prevent too many variations of logo signing harming the brand image, but I seriously doubt that Enicar ever used such a document. They used Guides allright, but not the paper ones (wink wink).

Thanks for reading. Of course you’re welcome to share your thoughts and comments. Till next time watchfam.