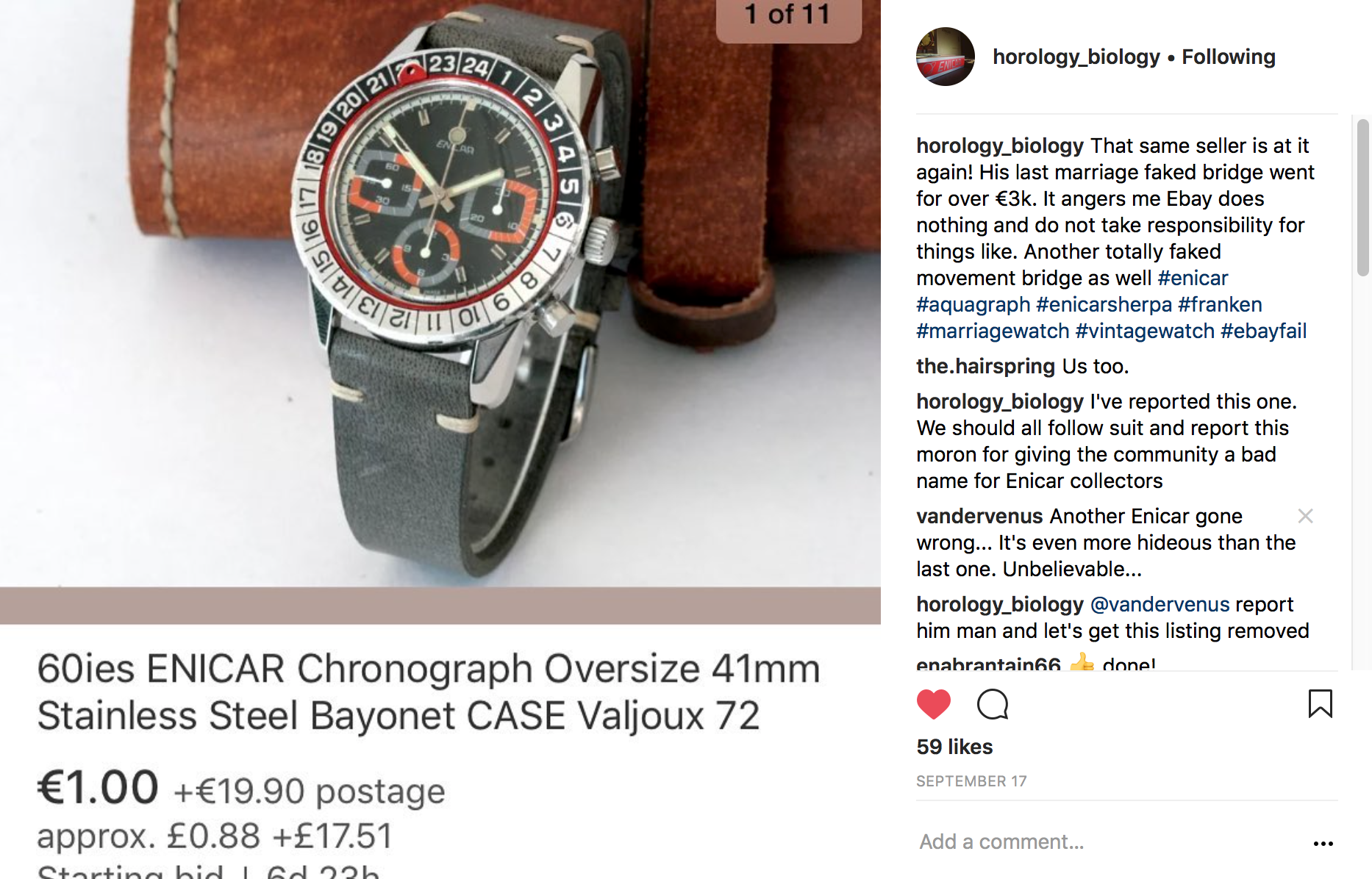 We Enicar enthousiasts are a breed that’s hungry for information. Lots of collectors I met try to expand their knowledge of our favorite little brand through forums (The Joy of Collecting Vintage Enicar Watches, Sammeltread Enicar Uhren) social media (Sons of Saturn) and watch fairs, but the fact is we’re mostly in the dark. There is no Enicar reference book. No glossy catalogs, quality overviews or online photo libraries. The Enicar archives disappeared from the planet after the company went out of business in 1987. The ‘new’ Enicar doesn’t seem to embrace the heritage. There is only a modest document put together by Nico van Dijk (I mean that with all due respect, because I find it very insightful and I do appreciate the effort).

With so little sources available, it’s very hard to determine what’s wrong and what’s right. In this episode, I will dive into the world of fakes, frankenwatches, transitional models, variations, mistakes, frauds and never seen before Enicars.

My aim is not to tell you fine folks that I’m the final word on Enicar authenticity. Hell no. I couldn’t be, even if I wanted to. But since I’ve started to collect and investigate Enicar, I’ve build quite a network of fellow collectors, buyers and sellers, former employees, former resellers and allround watch addicts. Together we’ve seen many, many Enicars. Also, I’d like to stress the point that I don’t wanna bring down anyone’s watch. I got some of my biggest kicks from Enicars that may have been ‘unoriginal’ or flat out wrong by a connaisseur’s perspective. So what! If you love your watch, you love your watch. But if there’s fraude in the game, that is a totally different story. So, here we go.

Above, there are three different examples of the magnificent Enicar Jet Graph chronograph. These are all later versions, because in the beginning, the Jet Graph had peddle hands and not these stick ones. Look at the register hands. Look at the chrono hand. See the differences? Now, are these configurations all legit? Are they original? I tend to say yes, but I can’t be 100% sure. They probably left the factory like this. But it’s also very possible that a watchmaker or jeweler swapped one of the little orange hands for a black one. Does this make a watch less Enicar? I think not.

The same watch, but with an orange pointer chronohand.

The two Sherpa Graphs above are almost identical. Almost. The version with the lollipop hand is most seen. That doesn’t mean the orange pointer hand is ‘wrong’. For starters, I’ve seen this variation at least twice before. The hand is an original Enicar one. Just because there is no catalog photo, doesn’t mean this chronograph is not legit. I actually think it looks better than the lollipop. That’s why I bought it 🙂

Now if you take a closer look at the Sherpa divers above, I’d say they have a problem. An Ultradive has a case with a very characteristic crown protection piece. A Super-Dive has not. So either way the cases of these watches got swapped, or the dials. For me this would be a reason not to purchase these, even if it is only a printed word on a dial. But if you’re just looking for a reliable, high quality vintage time piece, these could be the best watches you’ll ever find.

Did the swapping take place in the Enicar factory? I don’t know, I wasn’t there. But I do find it unlikely. I’ve spoken to a couple of former employees and they described a highly structured and well organized production process, especially till the mid seventies. There was strict quality control. And remember, these Sherpa models were the brand’s high end line. They cost a small fortune for a common watch consumer. My guess is that parts got swapped by watchmakers or jewelers, who simply had no other spares at hand when servicing or repairing a watch. Did the consumer bother? He for sure had no Google at hand to compare all the different models and variations, so maybe he never noticed the difference. Again, this is all speculative.

The Kaleidoscope, my own unicorn Enicar.

One of the many Enicar treasures by Boldwatches.

Some Enicars are rare. Others are even rarer. And once in a while, we discover something that was never seen before, like the Enicars shown above. They are definitely 100% original as far as I can tell. Enicar is still an unknown niche brand to many watch collectors out there. But for many Enicar owners the brand output can be surprising too. I’ve purchased some great pieces in the past, directly from sellers whose relatives left them a watch as a inheritance, unaware of the rarity or value of the piece. That’s when exciting variations and unicorns turn up.

Above are four examples of Enicar watches that can be found on Instagram. They’re a bit messy to say the least, judging from an Enicar collector’s point of view. Again, these are probably all good time keepers and they can be very valuable on an emotional level if there’s a story attached to it. That’s why I call them ‘question marks’. But these are not your typical cornerstones of a solid Enicar collection.

There is a whole lot of Frankenwatching going on. This goes for all brands I guess, so Enicar is no exception. The crappy stuff above was found on eBay: the place where sharks rule the waters. These advertisements were already commented by Enicar collector horlogy_biology and I have nothing more to add really but a fair warning to stay away from it. Even if you’re looking for the spares, I would still advice not to support this kind of scamming.

So, what is my conclusion? First: we need an Enicar reference book. It will be a hell of a job to make it. I think a complete reference guide will be virtually impossible. But if we combine forces, we could come a long way. Having said that, it’s also fun to compare your new found Enicar with the sources at hand. I’ve had many great talks about the smallest of details on a Sherpa. The not-knowing can be a bliss. And let me repeat my intentions again with this blog report: I’m not on a hunt to bring down watches that may not be ‘authentical Enicar’. Who am I to judge? I wasn’t even born when Enicar ruled the world (or at least a few countries). So lets remember the wise words of Bob Ross: “It’s all good. It’s your world. You decide what brings you joy.”

Signs of Saturn: the transition of the Enicar logo

An ode to the ladies of Enicar (updated September 7)