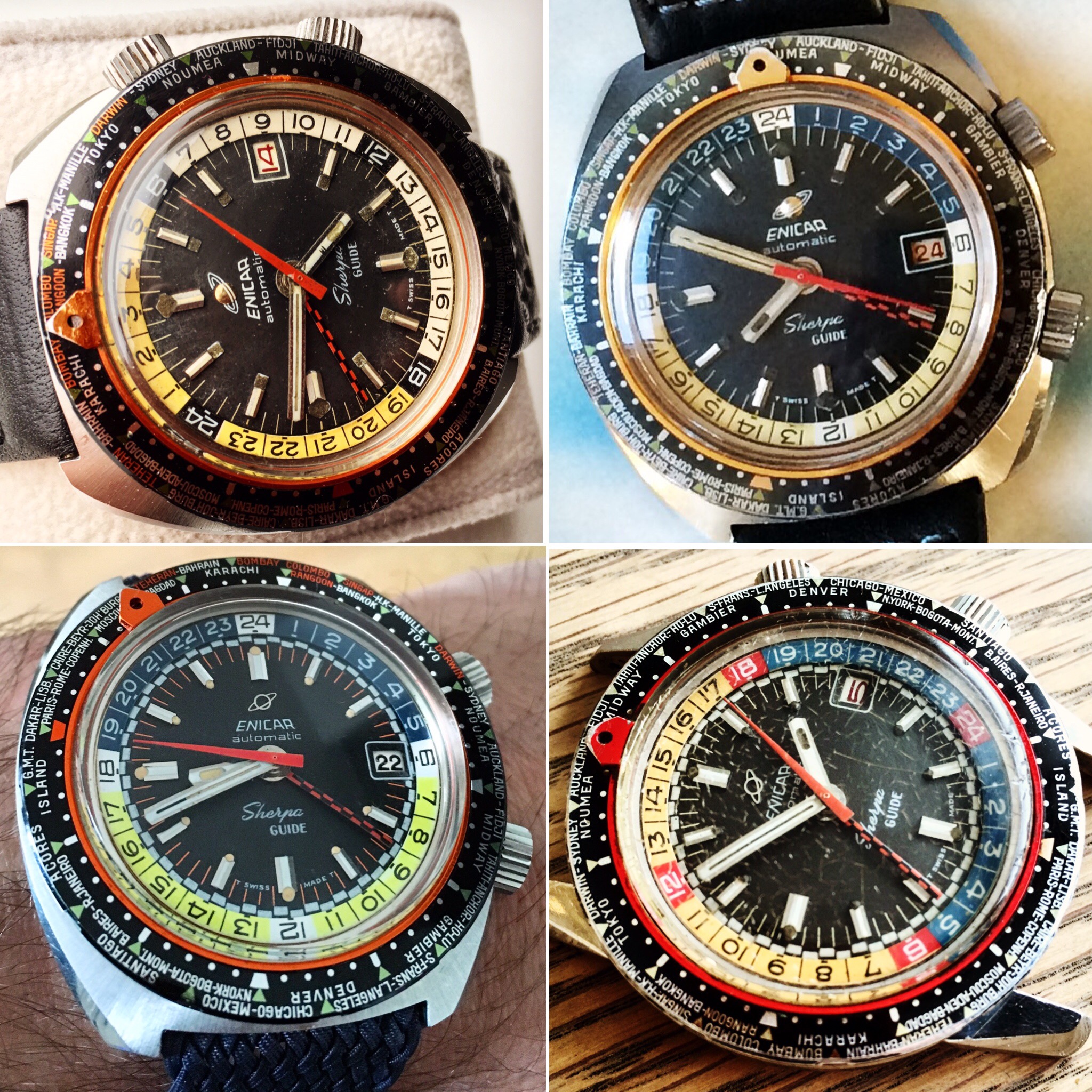 Tool watches from the sixties and seventies may not be as popular as Bitcoins, they sure are in demand. Nowadays these are the watches of choice for serious collectors who admire the technical aspects, for lovers of the most peaceful period in modern history, nostalgic young daddy’s like me, and for cool dudes who want to make a fashion statement. And boy, the Enicar Sherpa Guide does make a statement! This extraordinary tool watch was introduced by Enicar in 1960. Can you imagine what an impression it must have made? For starters, this watch measures an incredible 44 mm in diameter. From top to bottom, it’s close to 50 mm. Compared to the modest watch sizes back then, it was like wearing an alarm clock. And look at all the colors. Crazy colors, everywhere.

As with most Enicar Sherpa models, there are numerous variations in case, dial, hands and bezels. I’m not going to get into detail, because there is already written an excellent article on thespringbar.com about the many production phases that this model went through.

The Enicar Sherpa Guide is not a very rare watch. Usually there are ten to fifteen of these on eBay at any given moment. But it’s rare to find a Guide in good condition. Usually they look worn and beaten. Most of these have water damage. Pointers are often broken and the city ring is faded, scratched and not seldom unreadable. But hey, these were tool watches and they were heavily used! Guides generally took more beatings than Rocky Balboa in the complete saga.

The Enicar Sherpa Guide is a bad ass watch. It has got huge wrist presence. For a part that’s the result of the enormous stainless steel EPSA (Ervin Piquerez S.A.) case. There is a very insightful article about these high quality super compressor cases over here. Also, the many colors of the rotating inner bezel with the 24 hrs scale, are insane. To illustrate my point, here’s a photo of the Guide peeping out under the sleeve of my winter jacket.

I already mentioned the Guide being a tool watch. This big boy has a GMT complication and an extra hand (a thin steel hand with yellow or red tip, or even better, the very cool checkered rally hand), so a second time zone can be set. The inner bezel ring is rotated by the upper crown to make that happen. On top of that, there’s the already mentioned city ring with approximately 40 world cities and the red or orange pointer ring. Both rings can be rotated individually. This is the stuff every watch nerd runs hot for.

Last but not least: the Enicar Sherpa Guide is a pilot watch and a diver watch in one. The model was originally targeted at pilots of commercial airlines, like Swissair, Japan Airlines and S.A.S. But the EPSA case, dome crystal and fat crowns, give it all the characteristics of a dive watch. Super compressor watches typically have a depth rating of 600 ft, so there you go.

The Guide was marketed as a pilot watch.

But it was also marketed as a ‘what the hell?’ watch.

Why the Guide is not loved as much as it should

As I was told by Instagram member Stigmata63, who I consider the final word on Enicar Guides, the model was very popular in Asia. Most of the ones that come for sale are located in Malaysia and Indonesia. Unfortunately, they often look far from mint. But if you’re going for the true vintage look, they’re perfect. They’ve lived a life and show it proudly. And the movements (usually AR 1126, 1146 and 1166) are build like tanks. But in the current vintage watch market, condition is king. So that might be one reason the Guide is a bit of a black sheep compared to other Sherpa models.

The other reason: the Sherpa Guide is not for every taste. Personally, I love the color craziness. But many find it too disco, too funky, too hysterical. This, combined with the fact it can’t be linked to any famous F1-driver from the heydays, and the fact that they were produced in larger numbers than for instance the Super-Jet, makes this watch considerably less popular than other Sherpa’s. Fun fact: when it came on the market, it was actually more expensive than the Sherpa Graph!

So, if you want to own a true Enicar Sherpa that is a looker on the wrist and doesn’t break the bank, the Sherpa Guide might be just the watch for you. Till next time watchfam.

Most Guides were exposed to fierce sun for decades.

A bit faded, but very alive.