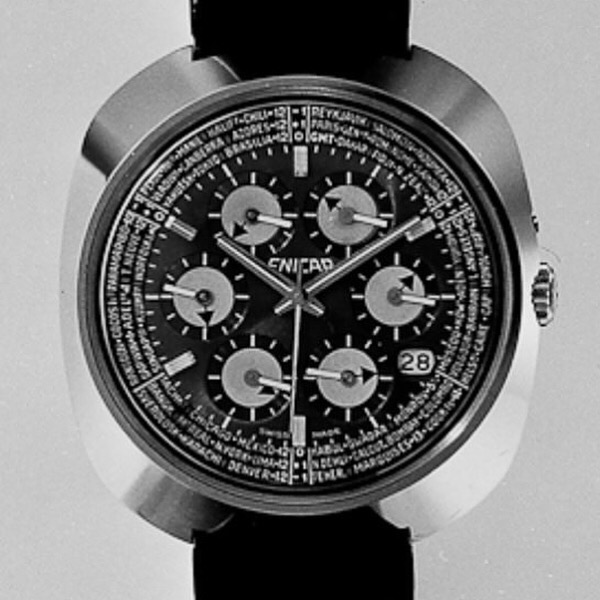 What’s the first thing you do when you acquire a new watch? Put it on your wrist. Look at it from all angles. Make photos and show it off. That’s exactly what I did when I got the Enicar World Time ‘Kaleidoscope’ in my hands. It just looked so juicy, minty and mesmerizing. But truth be told: it had some issues. The seller told me that it had been sitting in a safe for three or four decades. As far as he knew, it had never been opened. Judging from the pristine looking back case, this was correct. You see, Enicar is a bit of a stubborn brand. They liked to do things their own way. Most Enicar cases use a bayonet locking system (I am fully aware I’m on thin ice here, using layman’s terms…. told you I’m not a watch maker) and regular tools and keys simply don’t fit. That’s why you see so many scratched and mangled backs on Enicar watches.

The crown was very, very tight. I had to restrain myself from winding it and using force, afraid that my actions might break the stem or worse. I could hear a little rattling when gently shaking the watch. The hands, all of them, rotated nicely when I pulled out the crown and gave it a few twists. The date changed precisely at 00.00 and the number was located beautifully in the center of the date window. Of course it was not running smoothly. The first 24 hours, it was slow for 90 minutes. I knew what I had to do: call my watch maker and beg him to squeeze me in in his chock full agenda.

No keys? No problem.

What’s under the hood?

I trust my Enicars only with two watch makers. One of them is Willem van den Berg. Willem is a Dutch Master Watch Maker with over 50 years of experience. He’s a certified service provider for brands like Omega and Longines and he has restored a couple of my Valjoux 72 chronos very professionally. He also creates his very own time pieces and gets his inspiration from Dutch Masters like Vincent van Gogh and Jheronimus Bosch. His passion for watches is extraordinary. So when I called him and mentioned I managed to find a prototype watch with a seriously ingenious complication, I knew I would get his attention.

At the atelier of Vandenberg Watches, there is always a calmness that makes you feel like entering a world where gifted people are creating something magical. A world where I fit  in like a headbanger in a ballet studio. I usually come in all hyped up, full of anxiety, hoping that the verdict of the Maestro will be positive. Willem got the watch opened in two minutes (the standard keys didn’t fit, as expected) and there it was: the movement.

The AR 1145 can be found in Enicar Sherpa models like the Super-Dive, Sherpa Ultradive and Sherpa OPS. Is it a good movement? Hell yeah! It’s reliable, well built and easy to service. Also, it’s not that hard to source parts for it if needed. The fact that this watch contained a mechanical movement, was something of a relief to me. Some watch fanatics in my Instagram timeline suggested that this watch could only be battery driven, considering the complication of the six sub dials. “In 1967, a watch like this would have been impossible to build”, some thought. So when the AR 1145 showed its face after lifting the hood, I felt happy as a puppy.

The stainless steel case of the Kaleidoscope measures 40 by 45 mm. Height is approximately 10 mm, with a domed crystal that peeps out 2 mm above the case. On the back case, there is no reference number, only the Enicar logo and the inscriptions Ultrasonic – Incabloc – Swiss – Automatic – Stainless Steel. The case feels very solid and is rock hard. I expected a lug size of 20 mm, but it is in fact 18 mm. This accentuates the case shape on the wrist even more.

The inner bezel is divided into six segments. Each segment represents a different timezone and around 10 world cities. There is even an ingenious table of numbers that correspond with hours that have to be added or distracted from the time that is displayed on the referring subdial. And let’s be honest: who doesn’t want cities like Karachi and Paramaribo mentioned on their watch?

Once the dial is removed, there is some crazy stuff going on. Let’s start with the technical solution that makes this watch so special to begin with: the ring that connects the six sub dials to the main machinery (again, layman’s terms everybody). To quote Willem: “It’s quite simple really. That’s why it’s so ingenious.” Three small gears, connected to a bigger wheel around the axe, make the silver color disks rotate. They’re in a fixed position, which makes sense, because the separate time zones they represent are invariable too.

There’s something else. There is a sort of brace that touches the ring (bottom left in the photo). This brace is activated by pressing the little button above the crown. Guess what? It keeps the six sets of hands from rotating, while the main hands can be set. So this way, the owner can align the ‘normal’ hands set to one of the sub dials. Very nice!

So far we’ve seen a ‘standard’ AR movement, an inventive build-up, nine watch hands, six discs with an arrow, 64 cities from all continents and a bunch of gears. Pretty exciting when you take in mind that all this happend in 1967 for a prototype watch that was never taken into production. Or, as one of the guys in my Instagram timeline put it: “No wonder they went out of business”.

In the end, Willem took the AR 1145 apart too for a full service. Everything else was ultrasonically cleaned. No parts were replaced, not even the spring, because the watch was like new. There were no traces of heavy use, not even mild use. The Enicar was up and running again within two weeks and good to go for the next half century.

Only three questions are left to be answered. The first one is: will I wear this watch? Yes I will. Not on a daily base, but I’m planning to have it on my wrist regularly. I collect watches, not museum pieces. I know this is a very rare watch and there are no spare parts laying in my drawer if something breaks (except for the AR 1145 that is). But I promise everyone I will not wear it when going to the playgrounds with my kids, visiting a metal festival or arguing with my wife. Second question is: what is the value of the watch? I don’t know and I don’t care. Last question: how did this Enicar World Time get its nick name? Well ladies and gentlemen, here is how that went.

Thanks for reading and feel free to ask me anything. But be warned: technical questions will be answered in layman’s terms 🙂 Also, thank you to everyone who has advised me and helped me along the way (you know who you are).

The discovery of the Enicar Sherpa World Time 'Kaleidoscope' from 1967