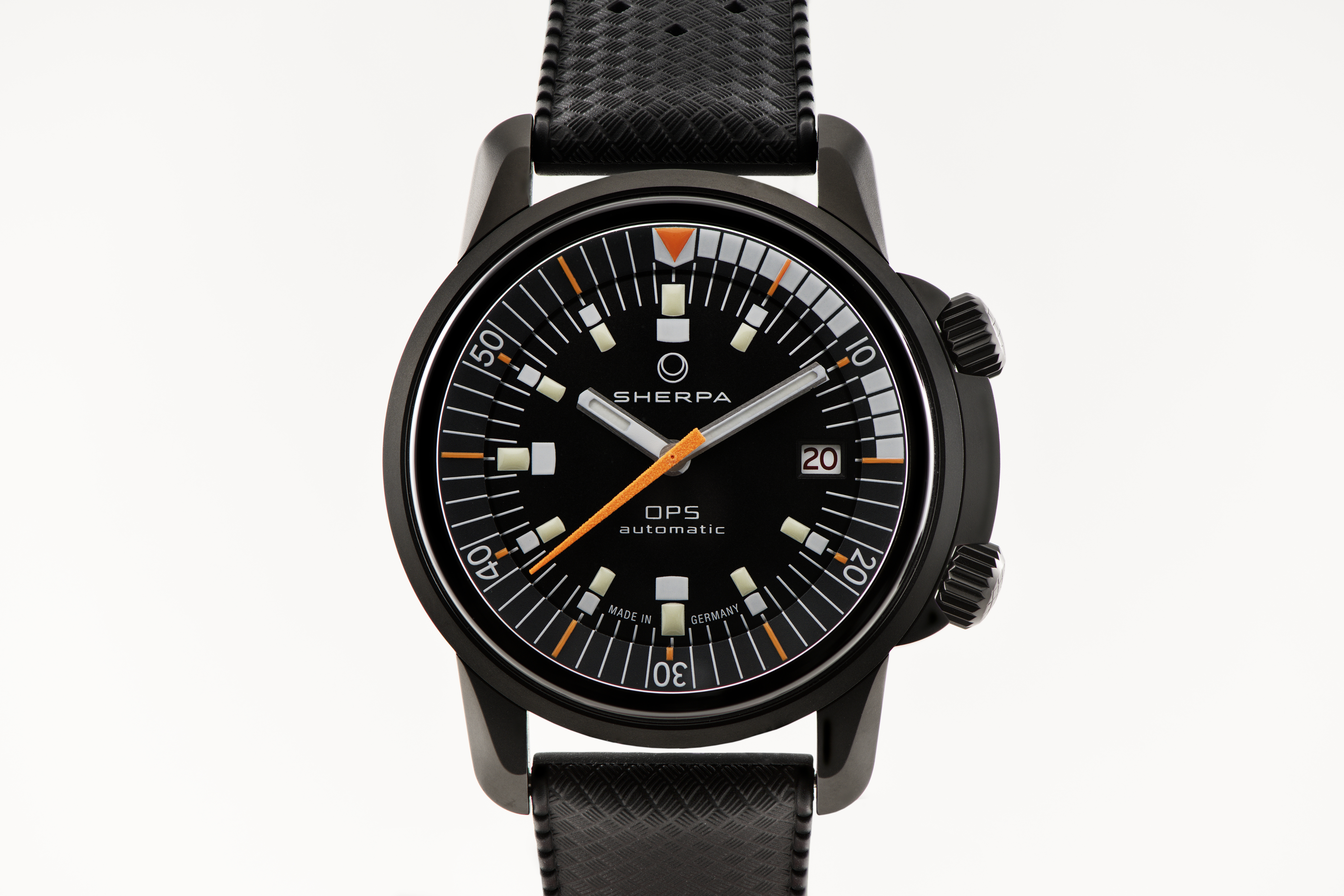 Starting up a brand-new watch brand during a pandemic. It’s a huge mountain to climb. Martin Klocke has been on a remarkable journey. He has just launched his brand Sherpa Watches to pay tribute to some of the most iconic watch designs ever created by Enicar and to honour the Sherpa people he feels so connected to.

Men on a mission

I met Martin, a Swiss born mechanical engineer, watch enthousiast and Buddhist, in July 2019. He contacted me to have a coffee and talk Enicar. Martin is, as you may have expected, a huge Enicar adept. I had just finished my crowdfunding campaign to make my dream project reality: the first ever Enicar book covering the full brand’s history. Martin had his own dream. He fell in love with the Sherpa divers and just couldn’t get his head around the fact these iconic models were never revitalized. His mission: making the Sherpa OPS and Ultradive available again for a large audience. And he just did!

Like many engineers, Martin is passionate about the ingenious technical solutions that were created to tackle practical problems. In this case, the famous waterproof watch case with bayonet lock closure (EPSA-STOP) and twin crowns (MONOFLEX), invented mid-20th century by the legendary Ervin Piquerez SA (EPSA). To unlock the secrets of the EPSA company, which has long been out of business, Martin dove deep into Swiss archives that had been closed for decades. It is safe to say he is now the leading authority when it comes to the EPSA heritage, having even more information than some of his suppliers who used to work for or with EPSA in the seventies! The rediscovered knowledge is fully transported into the Sherpa Watches OPS and Ultradive, the brand’s first models to come to market. An event that – after 60 years – will mark the rebirth of the true ‘Compressor Dive Watch’.

Respecting and surpassing the predecessors

The originals by Enicar have been wrist favorites of many collectors (Ed Sheeran is seen with an Enicar Ultradive on his wrist on various occasions). Apart from the logo and engravings on the case back, hardly any noticeable changes were made to the appearance. “The timeless designs of the Ultradive and the OPS did not need much finetuning, as their look and feel are as outspoken today as they were half a century ago. On a technical level, the new watches surpass their predecessors in terms of accuracy, water tightness and durability”, he states.

A unique feature of the Sherpa OPS and Ultradive lies hidden beneath the surface of the watch dials. The mechanical movement inside is not a regular automatic; it is a Mantramatic! Martin managed to have two wheels in every premium Selitta movement microscopically laser engraved with a Tibetan Buddhist mantra very commonly used in the Sherpa region. Following widespread Himalaya Buddhist tradition used in prayer-wheels, the wheels in the movement rotate constantly, sending out vibes of love, wisdom, and compassion from your wrist straight into the world – 30 million times per year. With the naked eye you will not notice the mantra is there. Instead, you will feel it.

Because Martin chose to use their name as a brand, and thus profit from their reputation, he believes that he should give something back. Sherpa Watches will donate a percentage of every watch sold and give it to a good cause in the Sherpa area in Nepal. The brand chose “Sagarmatha next” in the Khumbu region and the Nepal Himalaya Sherpa foundation in Kathmandu, both supporting different projects in the Sherpa regions of Nepal.

To me, this illustrates Martin and his project. I have not often come across someone as determined to do ‘the right thing’. He is also a perfectionist. Together with an incredibly experienced team of watch makers, engineers and suppliers, he has recreated two of the finest Enicar divers watches, without compromising one millimeter on quality. Like the originals from the past, the engineering, manufacturing, and assembling of each watch and its components is done in Switzerland and Germany, making Sherpa Watches a fully European enterprise. For an small independent brand like this, that must have been a hell of a challenge, especially in the middle of a pandemic.

The heart that ticks

I have been in close contact with Martin during his two years of research, production and developing. The traditional watch industry was not easy on him. He has had serious setbacks, but he never quit his dream project. Yes, I am biased. I’ve had the pleasure to work with Martin on various aspects of the project, including the website. But Martin has also consulted Enicar scholars all over the globe to make sure the look and feel of his watches were correct. Members of “the book team” Eliska Slovakova (graphic designer) and Maarten Coolen (photographer) were involved too. I simply love his passion for the old Enicar Sherpa models, his brand philosophy and his fabulous 2021 versions of the OPS and Ultradive, because these come straight from the heart. Hence the pay-off: Sherpa Watches, it’s the heart that ticks.

More information, technical details and prices can be found on the brand’s website: www.sherpawatches.com. Check it out if you’re on the hunt for a premium quality watch in general and a true Enicar tribute Compressor Dive Watch in specific. You can finally wear an OPS or Ultradive in the shower and you’re donating to a good cause while you’re at it.

Letters from the past: official Enicar correspondence 1942 - 1960