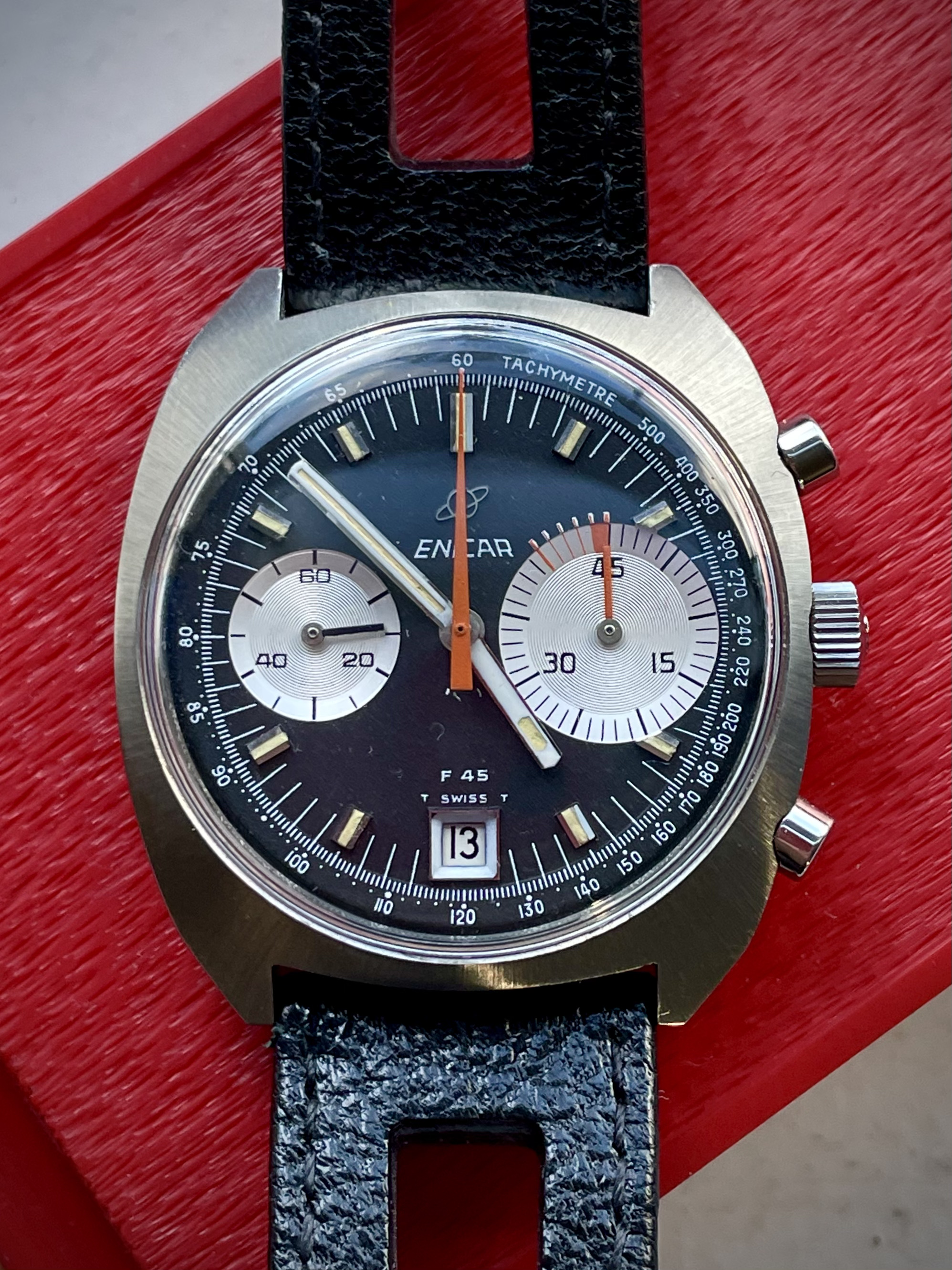 Watch brands have been sponsoring professional sports for decades. So far, Enicar can be linked to motor sports like Formula One, sidecar racing and motorcycle racing, diving, tennis, cycling, shooting and – since recently – boxing. For some of these sports, Enicar contracted the best players in their field to be brand ambassadors, like Stirling Moss, Jim Clark, Ken Rosewall and Geoff Duke, to name a few.

I have always wondered if a connection to the greatest game on earth was on the horizon. The answer is yes. Not only has Enicar been a consistent billboard supporter in the 60s and 70s of iconic Italian football clubs like Inter, Bologna and AC Milan (a costly affair even back then), there is also a specific Enicar model that was once owned by a Brazilian football God.

On a more modest level, Enicar had its own football team in the 50s. I find it very likely that the firm was involved in football even before that time (like PSV Eindhoven, a football club that was founded in 1913 by Philips electronics), because in the 30s and 40s Enicar employed enough workers, but my official documents only go back to 1954. Besides football, Enicar CEO Ariste Racine also facilitated sports like tennis and horse riding. “Zu eimen gesunder Geist gehört ein gesunder Körper” (a healthy mind in a healthy body) was the phrase he used to stimulate his factory workers to adapt a healthy lifestyle.

FC Enicar was a factory football team that played numerous other factory teams in the Biel region, like FC Certina, FC Omega (a 2:1 victory in June 1956 through a corner in the last minute!) and FC Rado. But the Enicar boys also competed against the local police force and bank employees!

Around 1968, Enicar introduced a number of sporty chronographs powered by a Valjoux 23 movement type. I already discussed one of these models here. An eye-catching variation of the two register chronograph is the ‘Big Eye’ that earned its nickname because of the larger counter on the right side of the dial. As usual for Enicar, the brand offered various dials, hands sets and case finishes.

With the ‘F45’, Enicar offered a football version of the Big Eye. The watch comes with a modified Valjoux 23 movement (it’s a hardware fix, 3 parts need to be replaced), so the owner was able to track the halftime of a football match, being 45 minutes whereas the standard version has a 30 minutes counter. I can imagine wearing this chrono on your wrist made you feel like the referee on the pitch. To be honest, the F45 was merely a gimmick, because in the late 60s, there was already a stadium clock present in practically every football arena. I have never seen the players wearing watches during a game either. But hey, it is still a very attractive feature, isn’t it?

So here we have a watch company that is involved with football by means of stadium advertising. A brand that launched its own tool watch dedicated to the game. What world famous individual player did the company contract to endorse the brand? It may have been the greatest of all time: Pelé.

Pelé is considered to be the most important football player ever and has often been referred to as “Soccer’s National Treasure.” The three-time World Cup Champion, FIFA Player of the Century (1999) and Brazilian Football legend became a superstar with his performance in the 1958 World Cup. He holds the record as the youngest player to ever play in, and score in, a World Cup Final and holds the Guinness World Record for goals scored in a career with 1,283.

Do I have a photo of Pelé with the watch on his wrist? No, I haven’t. Pelé was an ambassador for Hublot the last 10 years or so. There is no advertisement or article of him endorsing the watch either. But there is something else.

When investigating the F45 chronograph, I stumbled upon an auction from 2016. No less than 2,000 personal items of the iconic football player were offered by London based Julien’s Auctions, in what was called ‘the most important sports auction in history’. Items included his Santos FC game worn jerseys and boots, numerous awards Pelé received while playing with Santos FC, game worn jerseys and boots from Pelé’s appearances with the Brazil National Football Team, Pelé’s 1977 New York Cosmos NASL championship ring, his FIFA Player of the Century Award, Pelé’s L’Equipe Athlete of the Century Award, his 2007 FIFA President’s Award and the torch used by Pelé when he ran in the 2004 Summer Olympics Torch Relay.

Lot number 562 included two watches: a Seiko World Time and the Enicar F45. The set fetched £1,792. Among the 2,000 items collected between 1956 and 2007, there were only 14 watches. Is it possible Pelé worn this Enicar at some point during those years? I would like to believe so. But if that Enicar was only sitting in a drawer in his house, I’m more than happy too 🙂

Coming up: Enicar in Romania, a venture that never happened