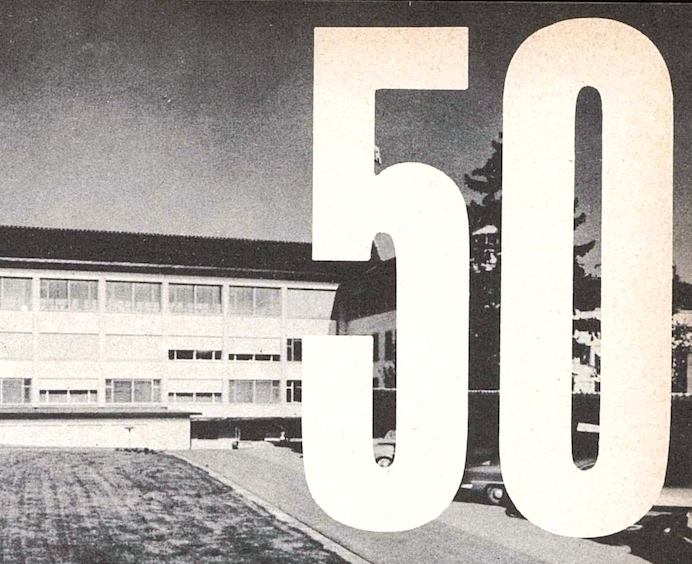 On May 24th 1963, Enicar S.A. celebrated the 50th anniversary of its foundation. It turned out to be an event with international, almost presidential allure. For the occasion, a beautiful booklet was created that documents the festivities perfectly. It’s a time capsule celebrating an era full of ceremonies, tradition and strong hierarchy. But also an era of endearing entertainment, collectivity and warmth.

Before I dive into the report of the actual happening, I’d like to quote from an article that appeared in Europa Star (1963, issue 23) giving a nice recap of the company’s history.

“In 1913, the father of the present General Manager (Ariste Racine, ed.) established himself on his own account at La Chaux-de-Fonds after having undergone training in various watchmaking firms. The new firm started on a very modest scale, Mr and Mrs Racine (Emma Blatt, ed.) being able to employ only one workman. The following years were difficult ones and the First World War broke out shortly after the company’s inception. We have to admire the ingenuity of the young manufacturers who managed to overcome obstacles as they arose and even made the firm prosper.”

“A little later, an acute labour shortage compelled Mr Racine to transfer his concern to Lengnau where he had already opened an assembly shop. Oscar Racine, the owner’s brother, joined the firm at about this time and collaborated in the creation of a movement-blank workshop which was to become more and more important for the expansion of Enicar, because it supported the finishing department by supplying the necessary pieces quickly and in sufficient quantity.”

“In 1940, Mr Ariste O. Racine, son of the founder, became General Manager at the age of 27 (!!). Enthusiastic and full of ideas, he has given constant impulse to the undertaking so that Enicar has never stopped growing. He is one of the driving elements of the whole concern, sees everything that goes on and keeps a check on the technical department, the movement blank shop, dials and cases, publicity and sales. His many innovations have contributed to keep the firm off the beaten track.”

“In 50 years, in spite of two wars and a long period of depression in the watch industry, Enicar has made a spectacular leap forward. The firm now ranks amongst the largest undertakings in the industry and employs 600 workers that produce 2,500 watches daily, in two factories in Lengnau and Oensingen. Enicar utilizes 600 electronic machines and ultramodern manufacturing processes.”

In 1963, there was a lot to celebrate. The 50th anniversary of Enicar showed the company at its peak. The Sherpa model line was very successful and the brand took a prominent position in the Swiss watch industry. That was certainly reflected in the guest list for the celebration. I found the official document containing the names of vip’s who attended the festivities:

This list gives a good impression of the various stakeholders that populated the Swiss watch industry in that period. These and many more guests attended the Official Jubilee Day on May 24th. According to the booklet, “More than 200 guests, representatives of the federal, cantonal and communal authorities, of the watch industry’s associates and of the press, as well as the leading customers and suppliers, paid us the honor of attending this gathering”

Part of the official program was the unveiling of a buste of founder Ariste Racine, who passed away on October 13th, 1958. It was followed by a tour of the main factory at Lengnau and a banquet at the Landhaus, Solothurn. In that setting, speeches were delivered by Dr. Hubert, Mr Tschumi, Mr Bauer and of course Mr Ariste O. Racine, “who gave a vivid account of the most important facts of Enicar’s history.”

In the afternoon, the Oensingen factory was visited. To quote the booklet: “The participants were able, above all, to admire the epilame-coating and ultrasonic-cleaning department, as well as the two assembly lines. After this, they returned to Lengnau, where a ‘stirrup cup’ (cocktails?, ed.) was served.”

On Sunday May 26, Enicar’s foreign agents were treated to a motor-coach tour. Only a direct quote from the booklet does justice to the level of entertainment the guests must have experienced. “The participants reached the Pillon Pass by way of the Simmental. A short stop at the summit provided the guests with the opportunity for a gay and refreshing snowball fight (!!). The vineyards of the Lake of Geneva, which are among the most famous in Switzerland, were seen in brilliant sunshine. It was in this magnificent setting that the Enicar Jubilee closed with a banquet at which the spirit of mirth and friendship reached its climax.”

What can I say? One can only imagine what the 100th anniversary would have been like if Enicar S.A. hadn’t closed its doors in 1987. Probably nothing like the parade of influencers, wannabe filmstars and the launch of another kitsch watch collection like Hong Kong based Enicar had in 2013.

Time for a change.