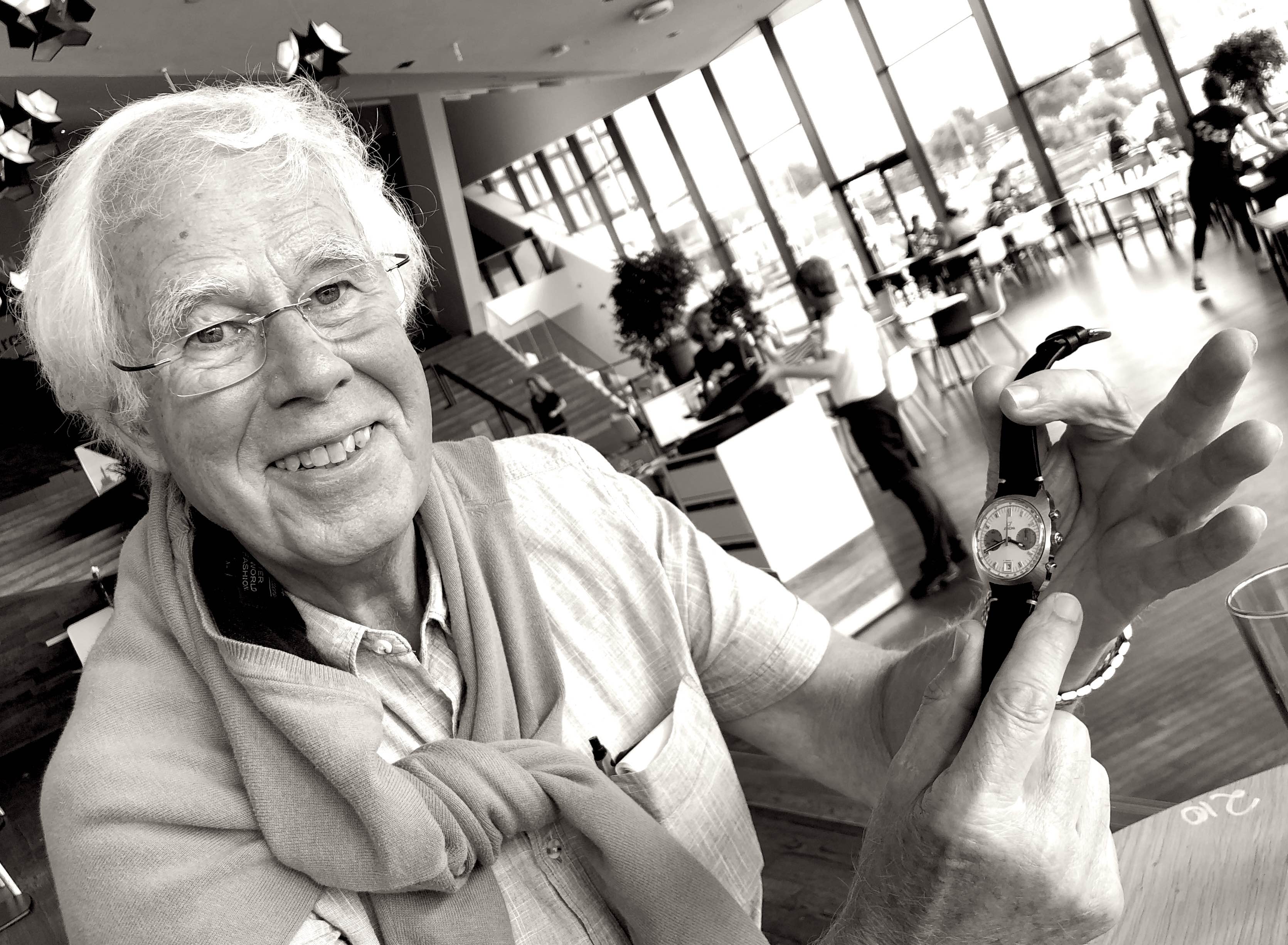 “You’re from Eindhoven, aren’t you?”, former Dutch Enicar agent Joop Bongaarts asks when we meet near Amsterdam central station. “I have some wonderful memories of Eindhoven. As a sales agent, I was on the road a lot. When visiting the south of Holland in the 1970s and 1980s, I used to stay in this place called ‘Oud Eindhoven’ (old Eindhoven), an ancient and tiny 6 room hotel in the middle of the centrum where bars and clubs were being flooded by thirsty and loud mouthed teenagers every weekend. The mattrasses offered the comfort of a pile of sidewalk tiles, the noise would make you jump against the ceiling. But still, I loved that place. Because every time I entered, the owner of the hotel welcomed me with a firm handshake, a smile and a heartfelt ‘So nice to see you again Joop!’. It’s the human interaction that makes it all worth while.”

Mr Bongaarts, now 80 years old, has been retired as a sales agent for quite a while. But his stories, enthusiasm and kindness are lively enough to make any sales organization want to hire him tomorrow. Mr Bongaarts was an employee of Th. R. van der Spek & Co. (or Van der Spek & Co.), the exclusive importer of Enicar watches for the Netherlands between 1953 till 1987, the year that Enicar went out of business.

The Amsterdam based business was founded in Hilversum in 1940 (the first year the Netherlands were occupied by the nazi’s) by Mr Th. R. van der Spek. In 1946, Mr A. Decnop became a partner in the firm and Van der Spek & Co. was born.

When did you join Van der Spek & Co.?

“That must have been in 1975 or ’76. There was a job advertisement that promised ‘a decent salary, a car and sufficient compensation for expenses. In reality, the wages were low. I had to work hard to make ends meet. A part of my income was coming from commission that I got from my sales, usually 3 to 5%. When I joined the firm, I replaced Mr Martin Hoffman, who had been a sales representative for the northern and mid regions of the Netherlands (from Groningen to Utrecht). There were 4 sales agents working at the company, 2 watchmakers, a few secretaries and the management. In my years at Van der Spek & Co., I visited half a hundred Enicar resellers at least once every 6 or 7 weeks. Meeting people, building relations, I loved it.”

How did such a visit to a local reseller go?

“I always went in with a suitcase filled with 16 different Enicar specimens. For every model, there were at least 6 or 8 different dials. In my time, we usually sold common Star Jewels Enicars (around 125 guilders, €55) and Sherpas (around 250 guilders, €110) with calibers from the AR16x series. So when I would present a 37mm day/date Sherpa, I was actually showing tens of different models, because dials and hands sets were interchangeable. My client would pick a number of watches and I would process my orders on Monday in Amsterdam. Repairs that had been dropped off by clients at their reseller, were also handed over (not many, because a sold Enicar would usually not come back again). Everyone who worked at Van der Spek & Co. was expected to be there. Mr Decnop was very strict about that.”

How were Van der Spek & Co. and the Enicar management doing business?

“The Enicar management gave their national importers a lot of freedom. Probably there was no interference, because sales were always excellent. We delivered the orders from our Dutch resellers directly from our own stocks. Once or twice a year, Mr Decnop would meet with Oscar and Ariste Racine in the Enicar Lengnau factory. I never went there myself, although I visited Baselworld every year to catch up with people from the watch industry, but I remember the stories from our CEO quite well. Mr Decnop was not the easiest person to work with, but apparently, Mr Oscar Racine wasn’t either. They did not get along that great. However, that didn’t hamper business a bit. We performed very well in the Netherlands (just like Sweden) in terms of sales. Mr Ariste Racine apparently just asked straightforward how many watches we were expecting to sell the coming period and these got sent to Amsterdam. It was that simple.”

Which Enicar models were the most popular?

“The Sherpa models sold very well, especially in the smaller Dutch villages. Because of their solid, watertight cases, the Sherpas were popular among bricklayers, construction workers, plumbers, carpenters and farmers. Chronographs we sold too, but only in small numbers compared to the Sherpas without special complications. I remember a story about a farmer who lost his Sherpa while plowing his fields with an agricultural machine. It disappeared straight into the mud. Some 5 years later, he accidentally found it again. He cleaned the watch with tap water and it started running like nothing happened.”

“Nearly every village had a ‘horlogerie’ and Enicar was a brand that belonged to the top 5% in terms of price and quality. Because of the 3 year guarantee on regular Enicar models and 5 years on Sherpas, watch resellers were happy to have Enicar in their stores. In the cities, usually Enicar could be found at one address exclusively. For Van der Spek & Co., Enicar was by far the most important brand. We also did a number of private label watchbands (Prins was the best known), jewelry and (alarm) clocks, but Enicar was without doubt the biggest moneymaker for our company.”

“We saw it coming, because the quartz crisis was already hurting our sales. The market for, in comparison, expensive mechanical watches was slimming fast. We are talking about the early 1980s, a time with inflation up to 10 – 13%! So watches were getting awfully pricey. Enicar introduced new models that were obviously influenced by the demands of their Chinese business partners and tried to catch up with the Japanese quartz brands by introducing their own Super-Quartz models. But these were too thick and clunky for Dutch consumer’s taste and still more than 3 times as expensive as the Seiko’s and Casio’s.”

“When Enicar went out of business in 1987, we lost the main brand in our portfolio. We did manage to buy some stocks from the factory and sold these for a short time to our Dutch clients. But in the end, change was inevitable. Together with a colleague, I opted for a management buy-out. Basically, we paid Mr Decnop for the remaining watches in stock. We left the Amsterdam office to restart in Almelo as ‘v/h Van der Spek & Co.’. My business partner and I tried to find another brand to represent for the Netherlands and we almost made a deal with Rado. But Rado was very demanding in terms of investing. My partner backed out and I was on my own. In stead of Rado, I became the importer of Glycine. That’s the brand I’m wearing on my wrist on the rare occasion my Sherpa date gets a day off.”

Enicar book back in stock