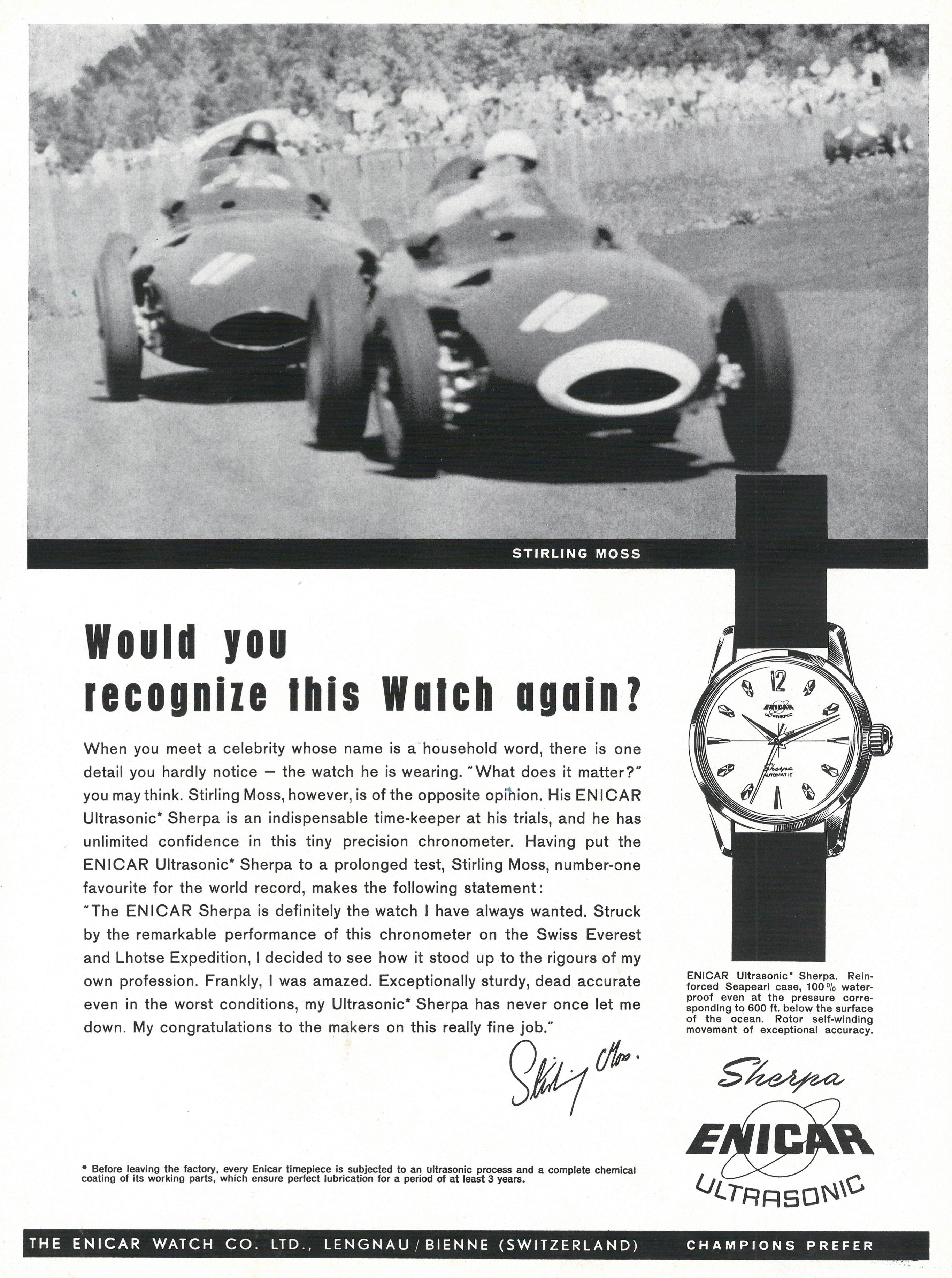 I’ve been working in advertising for over twenty years. When I started, there were actually some big clients who had their own website! Quite spectacular, because now they could share their brochure online, with the whole world, without having to pay for printing and shipping! What I’m trying to say is that the world of print advertising has drastically changed since the end of the nineties. Sure, the way print advertisements were written and designed changed a lot too between the fifties and the eighties. But these changes came slowly and gently.

The print advertisements I’ve collected from Enicar, give a pretty good impression of the developments in the advertising business. They’re typical for their time and also for the watch industry as a whole.

I’ve lined up some nice advertisements from the old days to take a peek at. Feel free to share them, cause I believe they are now public domain. Is Enicar still advertising nowadays? Could be. I know they hire Asian actors who are famous in their own countries to star as role models / ambassadors for the brand. But the modern Enicar brand is not why you’re here in the first place, is it?

Before we had the advertising and marketing industry, we had plenty of other industries. These industries produced stuff that had to be sold to consumers. To make sure that the potential buyer was aware of the products on the market, companies made announcements. You could say these announcements developed into advertisements at the point when there were so many companies making the same product a brand preference had to be created. The announcement above is from 1935. Below is a very, very early advertisement to promote the military watch. The other prints below are from the fifties, when Enicar started to use logo and products in their ads. The did not yet use claims or clear product benefits.

Tiny hands needed for this job

The fifties and sixties

Anyone who has ever seen an episode of the outstanding series Mad Men knows that the traditional advertising agency was populated by Account Managers and Creatives. And secretaries. The head of the Creative Department was usually a Copy Writer. It’s not hard to understand why. Copy was basically all there was. Designs and visuals were done by some guys with crayons and scissors. So your typical fifties advertisement would contain a list of product benefits and a silly story, usually stressing a strictly traditional view of gender roles. And the public bought it. During the late sixties – early seventies, illustrations were slowly being replaced by photographic artwork. Photos would eventually take up more space on the page than the copy. And finally, in the eighties and nineties, the body copy was more or less trimmed down to a tagline. You can’t stop progression, can you?

This could as well have been a page from a brochure

Not sure if this is fifties or sixties

Benefits, benefits and more benefits. Thanks @romuald.kociuba for this.

Explaining the essence of oil

Full color was very unusual back then

In the mid fifties, Enicar had already build a solid reputation of a watch brand with high quality dive watches. But the Seapearl had to compete with divers from brands like Omega and Rolex, so advertising was crucial. This resulted in some amazing print advertisements, as can be seen below.

During the sixties, it was getting clear that the Sherpa line was Enicar’s prestige project. The Sherpa models would be linked to famous sports professionals like Jim Clark, Geoff Duke and Stirling Moss. These guys would testify about the great quality and reliability of their Enicars in print ads (or so called testimonials). I have no information about how much money was made by Clark and others, but it will not come near the deal George Clooney made with Omega.

The Swiss expedition to the Himalayas in 1956 marked the birth of the Sherpa line. I have found the original booklet that was published by Enicar about this event and will do a full report on that in the near future. The event was promoted by a large advertising campaign, as you can see below. Also below, an print advertisement of the Mayflower voyage from 1957 that I already covered on this weblog.

The advertising style from the seventies and early eighties deserved special mentioning. Just look at these insane colors and awesome models. Groovy!

If you have print advertisements to share, please let me know. I’ll gladly add them to my this selection, and who knows a book in the future 😉 Till next time watchfam.

Coming up: meet the collectors!