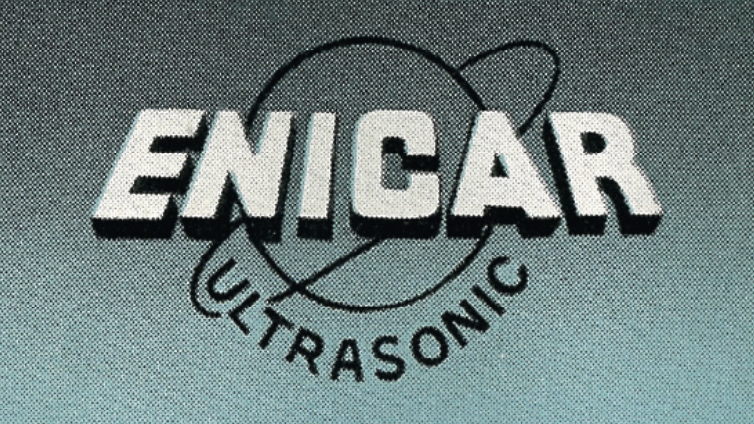 Many Enicar watches have the word ‘Ultrasonic’ printed on the dial, right underneath the logo. It may raise the question if this refers to a specific model line, like Sherpa or Seapearl. The answer is that it is the name of a technological procedure, introduced by Enicar in 1953.

In that year, Enicar installed a series of machines in a new factory in Oensingen to clean unassembled watch movement parts with the help of ultrasonic waves. This procedure, developed and designed by the Federal Institute of Physics’ industrial research section in Zürich (AFIF), was enhanced by adding a special chemical coating (epimalising oiling) to every part. The coating prevented the lubricant from dispersing and keeping the oil always at the desired place. By giving the movement constant lubrication, a watch’s lifespan was extended, and no maintenance was needed for at least 3 years. According to an article from corporate journal Saturn, even the natural and inevitable evaporation of the oil had been delayed by the Ultrasonic and epimalising process. Enicar claimed to be the only manufacturer in their sector to have adopted this technique.

The Enicar plant in Lengnau was Enicar’s headquarters. In Oensingen, the Ultrasonic laboratories were located.

Epimalising the ultrasonically cleaned movement parts with a chemical coating (applied as a gas) disperses the oil to only its intended locations, as can be seen in the photos below. The coating’s thickness is controlled to 0.00001 millimetres, thus, not interfering with the assembled movement’s process. Enicar was able to apply this on a mass production scale thanks to the assembly line based in the Oensingen factory.

Left: oil tends to disperse on a regular metal surface.

Right: oil on a metal surface after the epimalising process (top: day one, bottom: after 30 days).

The addition of the word Ultrasonic under the logo, on the watch dial as well as in advertisements, was seen until 1964 or 1965. Along with the introduction of the Sherpa Star model line, there was another catchy phrase launched: Star Jewels. According to the company, it was a trade mark that, like Ultrasonic, referred to “a system of oiling and chemically treating the essential parts of the movement”. A new marketing term for the approved Ultrasonic process, one could say.

In a 1966 article from Europa Star magazine (issue #38), the technical procedure is explained. Translated: “Oil creepage in the escapement has long been a headache for watch manufacturers. Various solutions have been devised to remedy this situation (epilamising all the surfaces of the escapement parts, making grooves in the pallet stones and in the wheel teeth, ect.) but none of them had given satisfaction so far. Enicar has sole the difficulty by developing a new epimalising process adapted especially to the escapement (Brevet Suisse No. 402/742). The system is based on a chemical combination which causes a change in the state of the surface to be treated and makes it possible to control the spreading of oil with great precision. The parts treated can be cleaned afterwards without altering the effects of the epilamisation process in any way.”

This means, in my honest opinion, that an Enicar watch that says Star Jewels on the dial, is a watch that carries an in-house produced AR movement, treated with the aforementioned epilamising process. It’s not a special model line, nor an indication of extra jewels added to the movement. The Sherpa D Star Jewels on the bottom page illustrates this theory. Is it confusing? You bet. But that is what we love about the wild ‘n wacky world of Enicar, isn’t it?

The Enicar book is finished

Postponed: an evening with Enicar