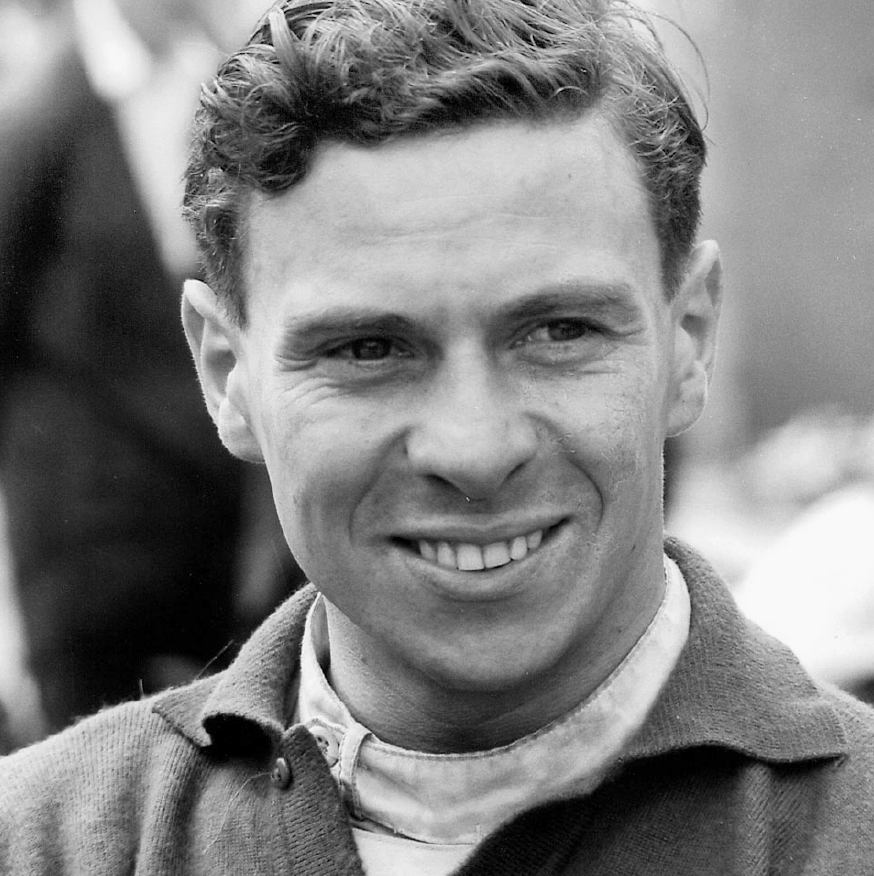 Soon after its introduction in 1960, the Enicar Sherpa Graph chronograph was coupled with a Formula One driver who would become a two-time world champion and an icon of professional racing, Jim Clark. Choosing the Scottish ‘gentleman driver’ as the brand’s ambassador turned out to be a genius move. Enicar created advertisements, watch displays, postcards and magazine articles to expose the successful commercial marriage.

Enicar Publicity Manager Mr Gaston Sieber was personally responsible for selecting the brand’s future flag bearers and clearly understood their power. He explained what happened when Jim Clark sold watches. “Using a champion in watch promotion causes an association in the consumer’s mind, which is extremely beneficial to the product displayed. He is impressed by the fact that the watch shown to him is also worn by a celebrity he knows well and admires. This is essential for a manufacturer wishing to adopt a dynamic policy at the commercial level and who therefore fights shy of the thousands of stereotyped advertisements that express platitudes in a pedantic style and show a whole lot of anonymous faces that mean nothing to anyone.”

Mr Sieber admits in the interview that Enicar took a risk contracting the relatively unknown Clark in the early sixties. “We saw a future champion in Jim Clark when Fangio and Stirling Moss where still the undisputed kings of the race-track. Now, a few years later, the fame of Jim Clark has eclipsed even that of his illustrious predecessors. Needless to say, the popularity of Enicar in sporting circles has gone up with that of its champion.” The Publicity Manager explains that getting the ‘Enicar champions’ to wear an Enicar watch is not only good for publicity, but also for testing the watches in difficult circumstances. Clark did exactly this in 1965. Wearing his Sherpa Graph, he drove at an average of 242.5 kilometres per hour through Indianapolis. A race he won of course.

In 1957, Enicar contracted British racing driver Stirling Moss to represent the brand on official occasions and during his racing activities. According to the Saturn magazine, Mr Moss selected the Ultrasonic Sherpa as his reliable companion. This was the same model that went to Mount Everest and Lhotse. An interesting choice for Moss, since, although chronometer qualified, this particular model was not a chronograph but a dive watch. Enicar had already produced several two register chronographs in the late forties and fifties that were equipped with movements from brands like Venus or Lemania. Mr Moss would also be advertised with the Sherpa Graph in later commercial outings.

In 1969, Enicar made a sponsorship deal with the then 33-year-old German (born in Czechoslovakia) Formula One and sportscar driver, Gerhard Mitter. As a junior, the talented Mr Mitter had already won 40 titles. He debuted in Formula One in 1963 but it was in sportscar racing and hill climbing for Porsche that he shined. He had many wins, including the 1966-1968 European Hillclimb Championships against Ferrari, the 1966, 24 Hours of Daytona (Porsche 907, in class) and the 1969 Targa Florio (Porsche 908), which was his final major victory. He also ran three professional car companies and had 75 employees.

The chronograph that is now known as ‘Gerhard Mitter’.

Unfortunately, the collaboration between Enicar and Mitter would last less than a year. He was killed on August 1st at the Nürburgring while practising for the 1969 German Grand Prix. That summer, he visited the Enicar factory in Lengnau and was asked about the risks of his profession: “I am not afraid of death. For me, death is a part of life. When you are racing, you are aware of the danger. Even in training, the risks are much larger than one would expect.”

Geoffrey Ernest Duke, better known as Geoff Duke, was a British road racer born in St. Helens, Lancashire. He won multiple motorcycle world championships before retiring from competition and becoming a businessman based in the Isle of Man. He raced several motorcycle brands: Norton, Gilera, BMW, NSU and Benelli between 1950 and 1959. Fun fact: Duke was the most famous rider to adopt one-piece leathers – he had enlisted his local tailor to make the first of his now famous race suits. Judging by the watch model Geoff Duke endorses in the advertisement, he was an ambassador for Enicar between 1956 and 1959.

Swiss engineer Rudi Kurth, also known as the ‘sidecar professor’ because of his innovative work on fibreglass bodies and ultra-flat chassis, teamed up with Dane Rowe from North West England. Partners both on and off the track, they formed a sidecar racing team in the sixties and seventies, a time when few women participated in the sidecar racing or in fact, any motorsport. Enicar found this notable and creative sporting power couple very relatable.

The Enicar book is finished